Please come out to show solidarity with Dr. Hassan Diab. Join us in Toronto at the Court of Appeal for Ontario, today and tomorrow, November 4 and 5, for a crucial hearing regarding Canada's unjust extradition law. 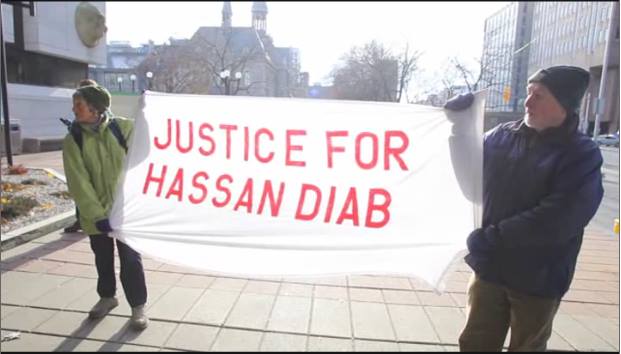 Take a stand against extradition based on secret intelligence and a single handwriting analysis report that has been discredited and condemned in Court!

You can attend Court the whole day or come and go whenever you wish.

For those who cannot make it to Toronto, there will be a live video feed of the appeal hearing into the Ian Scott Courtroom on the University of Ottawa campus. The live feed will cover both days, November 4 and 5, and will be open to the public. Click here for more information.

For information about transportation from Ottawa to Toronto, contact: Ria Heynen, r-j.heynen@bell.net

Hassan’s case points to glaring problems with Canada’s extradition law. In extradition cases, the Charter rights of the person sought are severely compromised. Canadian standards of evidence do not apply. The standard for extradition is so low that Canada hands people over to other countries based on evidence that is not acceptable in Canadian courts. Evidence submitted by the foreign country is presumed reliable, and the ability of the person sought to challenge the case is severely limited. Even though Hassan’s finger prints and palm prints do not match those of the suspect, he was prevented from introducing this evidence in court. Canada has extradition treaties with countries that allow secret intelligence, including intelligence that may have been the product of torture, to be used as evidence at trial. Moreover, Canada’s extradition law is unbalanced, as Canada extradites its citizens to countries that do not extradite their own citizens (France, in this case).  We must demand that Canadian standards of evidence apply to extradition cases, and that Canada not extradite its citizens to countries that allow secret intelligence — including intelligence obtained from torture — to be used as evidence.