Today, buy nothing. Not even a book 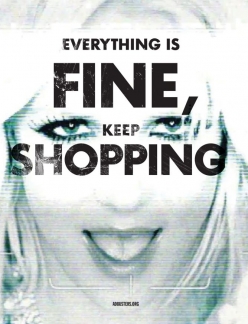 Well there you go.

Now AC/DC rocks it right wide for Wal-Mart, in the store’s “Black Friday” ads. You can see one here, but before you go, take a guess what song it is.

Number one with a bullet, I'm a power pack

They've got to catch me if they want me to hang

And a Merry Christmas to you, too!

So today is Buy Nothing Day. Started by Adbusters magazine out in Vancouver. It’s an international day where you “participate without participating” – in this case, by not participating in the consumer economy.

It’s cool, Octopus Books supports it, in fact we shut down every BND and put something in our window saying, hey, it’s Buy Nothing Day, don’t buy anything.

Not even a book.

Yeah and maybe our message gets flattened by the stuff and noise and shiny object that is Black Friday, the official kick-off of the (North American) Christmas sales season. The next best thing to Boxing Day sales.

The economics of Black Friday are gross. The ecologics of it are gross. And BF is spreading to Canada too eh as the deep integration, the bad kind, continues.

You may have noticed, at least this writer did, that Black Friday only recently became something we talked about – let alone participated in – like in the last couple years maybe? Now all sorts of companies are holding their own Black Friday sales and we don’t have to rely on hearing about BF from friends and neighbours doing a little cross-border shopping.

Adbusters saw it coming. But what do they know, you ask? Some. They were the ones who like invented the term Occupy Wall Street and then added a hash tag, right?

Anyway then Adbusters also timed the date of Buy Nothing Day to float down like a gossamer wing to land atop the chew-devour of the jingly jangly maw.

Maybe next year they’ll call it Steal Something Day. Raise the stakes. Participate By Helping Yourself.

But seriously folks, our political system is broken. Our economy is breaking the planet. And folks are going broke getting steals and deals.

And have a nice weekend.