Veronica Newbury is a second-year student in the School of Journalism and Communication at Carleton University.

Octopus Books hosted a film screening of the documentary Revolutionary Medicinein the foyer of their Bank Street location last Thursday evening. The film, directed by Beth Geglia and Jesse Freeston, tells the story of The First Garifuna Hospital, built and managed by the Garifuna people of Honduras themselves after facing years of oppression and little to no government support. Located on the northern coast of Honduras, the hospital is transforming its surrounding communities by providing them with free access to health care professionals and medication along with activating on the community’s behalf to secure political rights from the Honduras government. 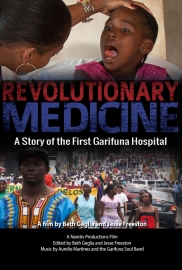 The event drew in a diverse group of attendees, ranging from university students to retired doctors and social workers. Freeston’s mother was also there to provide background information on the making of the film and to shed some light on her son’s future projects. Following the screening of the film, Adrienne Silnicki, the national coordinator of the Canadian Health Coalition, lead a vivid follow-up discussion about the hospital’s model of health care and how it compares, or exceeds, the hospitals here at home. The discussion ended late, everyone eager to share thoughts on how the Canadian health care model may be improved. Silnicki believes it was important to close the event with a conversation. “In Canada much of my time is spent fighting for protected, strengthened and improved public health care. I want others to pay attention to our health care system and feel empowered to be more involved in their care and to demand expanded care,” she explains.

Recently graduated Carleton University student Bilal Razach agrees. He believes the process is particularly important for people of a younger generation to take part in. “Getting out there and realizing that more people aren’t satisfied with the way things are and that not everybody is complacent is an eye-opener,” Razach says. An event like this one can also serve as a call to action for evolution in our current health care systems. “We can actually come out here and have educated conversation and try to figure out a plan, not just asking for one but for all of us to be part of the plan,” he adds.

The film screening is just one of many activities Octopus Books organizers every month. As an independently run bookstore, they seek to support and promote other independent endeavors. Events coordinator Pei-Ju Wang thinks of the store as a public educator by providing a space for people to come together and to talk about issues that aren’t discussed in mainstream media. “I wanted to find a documentary that could inspire us to look at alternatives to our current systems,” she explains. “The Garifuna Hospital is such a powerful political action that was not highlighted enough. It makes us think about what constitutes political actions.” Wang is adamant that the events hosted by Octopus and the books sold at the store force the public to think critically, which she believes is important not only for individual growth but also on a collective level to move towards the creation of a better world. Last week’s film screening certainly seems to be a step in that direction.

For more info about the documentary, Revolutionary Medicine : https://www.facebook.com/revolutionarymedicinedocu