The relentless campaign waged by Ottawa residents to rid the city of its remaining independent bookstores has claimed another victory!

The news broke over the weekend that Hintonburg’s Collected Works will close on Dec. 24 unless some angelic investing comes along. 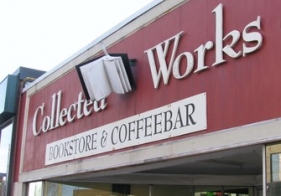 Fie! Let us hope nobody steps up to throw their money away.

The sooner we rid the city of community-minded havens of independent publishing and thought, the better.

For too long, for centuries, local booksellers have played a vital role in fostering literature and the love of books and reading. They have supported new, young and dissident voices writing truth to power in poetry, literature and nonfiction. They’ve had a good run, and we tip our hat.

But finally, our more rational and efficient economy has created legions of new super consumers, rational button pushers who are bringing electrically disembodied shopping to life while putting small book stores to death.

A recent online poll (at the time of this writing) found that local shops sell fewer books (23.42%) than either ebooks (26.16%), big chain stores (25.62%) or online retailers (24.79%). Though unscientific, the poll gives us hope that the market share of local shops will continue to drop. We will monitor polls and other surveys and will update our faithful readers at every opportunity.

In March, long-time bookseller Nicholas Hoare announced it was closing its stores in Ottawa and Montreal. In July, Ottawa’s feminist bookstore, mother tongue books, closed after 18 years. October brought the news that Books On Beechwood will bite the dust in January. Now Collected Works. At least one other Ottawa bookshop is on the rocks.

You could say it’s been an annus horribilis for Ottawa’s independent bookstores. That would be an understatement, Latin and all. You could point to outdated business models. You can hide your ereader or deny shopping online or patronizing big box barracudas while you do so.

Or you could just say the obvious. Ottawans just don’t want independent bookstores. They just don’t give a buck.