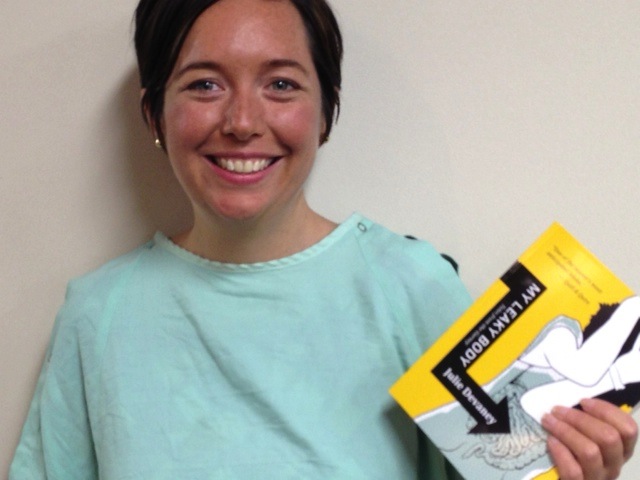 When she puts on the gown, she goes from being Julie, who can talk about anything, to being a patient, who is a condition.

That condition is ulcerative colitis. It kicked her ass but she kicked right back, transforming her struggle with her health – and with our health care system – into a chance for healing and transformation of both. She’s impressive, to say the least.

Julie has told her story to over 80 conferences and events across the country, from medical societies to Marxist gatherings.

Last night, Julie spoke at Octopus Books, telling us about her experiences in, and her advocacy for, our public health care system – despite it all. It’s a packed house, and seems to be a mixed crowd, full of old friends and new folks we’ve never seen before.

The idea of being a patient in a health care system that doesn’t always provide responsive, timely care is a sensitive topic for progressive Canadians. Understandably, we’re sometimes reluctant to face the system’s many faults and stress-points for fear of giving the privatizers any ammo.

But it’s in these cracks between our rhetoric and our institutions’ realities that new possibilities emerge – like the prospect of deeper alliances between patients and health care workers (doctors, nurses and support staff alike). These fissures reveal actual experience, lived experience – and that is where is real change always starts.

“I like the idea of cracks,” Julie says. “When I first started performing this piece, I didn’t want to bring any sense of professionalism to anything. I wanted to be able to show the cracks like if I lost my page, if I lost my thought. I think that space – that crack – allows people to relate to me as a person, and creates space to tell their own stories.”

The lightbulb went off when Julie found herself constantly being surrounded by medical interns and other staff talking about her as a condition, as an educational or training aid, like she wasn’t a person  – hello, hello – under the hospital gown.

“I was like a big show,” she says. “There were all these people performing around my bed, but I didn’t have any lines.”

So she wrote some.

She admits to feeling a “little bit caught” between her support for public health care and the way she was treated, shunted into hallways and closets. At one point, she began to cry, “loudly and unashamedly” as if to remind staff that she was still there.

She says she cried in her sleep and cried upon waking. Her chart says,  “Patient weepy”.

“What’s the matter with her?”

“She’s just embarrassed because she has a bag.”

As if her pain wasn’t enough.

No, she tells us, imagining that a ghost inside her has got hold of a megaphone. On the stretcher in the recovery room, she is possessed by her own ghost crying out, “No! That’s not it at all! I’m 24! This is supposed to be over!!!”

She realizes there’s nothing actually wrong with her but that she’s powerless and lying in a room with a bunch of medical professionals and maybe there’s something wrong with them.

Apparently, that’s not the right answer. She’s told, “A ten is the worst pain you’ve ever had. How much pain are you in?”

She’s told, “We can’t move you out of the recovery room until you can rate your pain lower.”

Bed blockers. That’s the term that gets thrown around by doctors and other staff to describe patients with chronic conditions that “shouldn’t be there”. She wonders whether she’ll projectile vomit.

She sees patients being mistreated and she speaks up.

“It doesn’t serve anyone to deny that people aren’t having these experiences. How do we move forward?”

She knows what we’re up against.

She describes how she snuck into an event organized by the right-wing capitalist propaganda group called the Fraser Institute. Their founder, Michael Walker, was speaking to a business audience in a room sealed off from the public and – importantly – from the media.

But Julie sees the pressures that hard-working folks in the system are dealing with, and acknowledges that their humanity is compressed in a system that leaves its workers no space and no time.

To challenge this, Julie talks about communication, and collaboration. She blasts away at the false consciousness that professionals should detach themselves from their emotions and from the situations they face.

“Staff have better day-to-day experiences when they have the space and the time to have discussion, and to foster the informed consent of patients. Where’s there’s real space for interaction,” she says.

She looks to the future.

“Thing are going to shift,” she says. “What my parents would put up with is stuff my god-daughter won’t.”

Buy her book from Octopus!