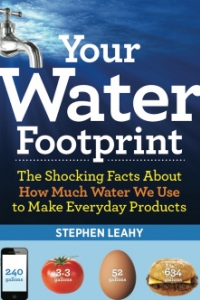 Your Water Footprint reveals how water is essential to our way of life in ways we never imagined. While water usage continues to soar, shortages now affect more than 3 billion people including millions of Americans and Canadians. A decade from now 3 out of 5 people will face water shortages.

It takes more than 7,600 liters (2,000 gallons) of water to make a single pair of jeans. That morning cup of coffee required 140 liters (37 gallons) of water before it found its way to your table—water that was used to grow, process and ship the coffee beans. When we spend money on food, clothes, cellphones or even electricity, we are buying water  – a shockingly large amount of water.

Your Water Footprint provides essential information to reduce your water use which will help you save money, be prepared for shortages and ensure our children and grandchildren will have abundant fresh water.  Water-wise choices is all about smart substitutions and changes, rather than sacrifice and self-denial.

More info about the book: http://yourwaterfootprint.me/.

Stephen Leahy has been an independent journalist for over 20 years and has reported on environmental issues from dozens of countries. He has been published in many leading publications around the world including National Geographic, New Scientist, The London Sunday Times, The Guardian, Vice Magazine,  Al Jazeera, Maclean’s Magazine, Earth Island Journal, DeSmog Canada, The Toronto Star, Wired News, China Dialogue, Mo Magazine (Europe), TerraGreen (India), and Common Dreams.

Based near Toronto,  he is also the senior science and environment correspondent for the Rome-headquartered Inter Press Service News Agency (IPS), the world’s largest not-for-profit global news agency. IPS articles are published in over 500 newspapers and magazines all over the world reaching an estimated 200 million readers in up to 20 languages. IPS news is also broadcast by over 1000 radio stations, potentially targeting over 150 million listeners.