Writing Herself into Being Book Launch with Patricia Smart 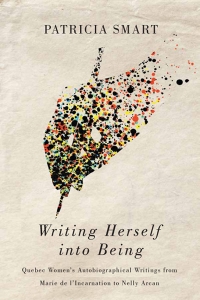 Writing Herself into Being ‑ the author’s own translation of her award‑winning French‑language book De Marie de l’Incarnation à Nelly Arcan: Se dire, se faire par l’écriture intime (Boréal, 2014) presents a feminist analysis of women’s struggles for autonomy and agency from the founding of New France to the present day. Winner of the  Prix du livre d’Ottawa 2016, the Prix Jean‑Éthier‑Blais 2015, the  Prix Gabrielle‑Roy 2014, finalist for the Prix littéraire Trillium 2015 and the Governor General’s Literary Award 2016.

Writing Herself into Being examines published autobiographies and autobiographical fiction, as well as the annals of religious communities, letters, and a number of published and unpublished diaries by girls and women, to reveal a greater range of women’s experiences than proscribed, generalized roles. Through close readings of these texts Smart uncovers the authors’ perspectives on events such as the 1837 Rebellion, the Montreal cholera epidemic of 1848, convent school education, the struggle for women’s rights in the early twentieth century, and the Quiet Revolution. Drawing attention to the individuality of each writer while situating her within the social and ideological context of her era, this book further explores the ways women and girls reacted to, and often rebelled against, the constraints imposed on them by both Church and state.

From the founding of New France to the present day, Quebec women have had to negotiate societal expectations placed on their gender. Tracing the evolution of life writing by Quebec women, Patricia Smart presents a feminist analysis of women’s struggles for autonomy and agency in a society that has continually emphasized the traditional roles of wife and mother.