World Launch of 3 Plays with Playwright and Director Alanis King 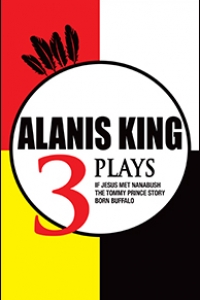 Growing up surrounded by music, dance and storytelling, Alanis King turned to drama early, not only as a way to express herself, but to explore the rich heritage of her community. It was in her home community at the Wikwemikong Unceded Indian Reserve on Manitoulin Island that Alanis embraced her community's vibrant oral traditions, ageless stories filled with grand characters and deities as magical as any found in the Western canon. In talking about her work, Alanis notes: "I'm not interested in teaching or presenting Shakespeare or Molière because we have our own classics that we have to explore: creation stories, myths, histories. We have lots of writing to do, lots of plays to do that have not been out there. It's in our oral traditions so we need to remain connected to the elders."

Playwright and director Alanis King has quietly become a force in Native North American drama. Born into the Odawa Nation, Alanis became the first Aboriginal woman to graduate from the National Theatre School of Canada. She is a past Artistic Director of the Debajehmujig Theatre Group and the Native Earth Performing Arts in Toronto. She was also Artistic Director at the Saskatchewan Native Theatre where she taught risk-prone inner city youth life skills through drama. King has also produced, toured, directed and developed a wide range of plays in many First Nation communities across the continent. To date her critically acclaimed plays also include Manitoulin Incident, Bye Bye Beneshe, Song of Hiawatha: An Anishnaabec Adaptation, Order of Good Cheer, Gegwah, Lovechild, Artshow, and Heartdwellers.

Like all good drama, the three works collected here spring from the community and experiences of the playwright, but in such good hands the results are universal. As Alanis concludes, "we create for ourselves, but all are welcome."

When Jesus turns up at the Champion of Champions Pow-Wow, the first person he meets is Nanabush. Together they form an odd pair. Nanabush is earthy, irascible, fun-loving. Jesus is formal, introverted, a fish out of water. However, as they venture across the back roads, bars and bus depots of Turtle Island, the two will discover that they are not so different after all.

The Tommy Prince Story an emotionally charged drama that brings to light the incredible life and times of the great Saulteaux warrior. As Drew Hayden Taylor concluded: "This is Alanis at her finest."

The final play is the lively Born Buffalo which will take the reader back into the mystical age of the buffalo alongside fraternal twins magically transformed into bison.