The Wondrous Woo & The Witchdoctor’s Bones! 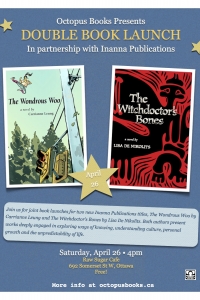 We are launching two novels published by Inanna Publications at a special time and location!

The Wondrous Woo by Carrianne Leung & The Witchdoctor’s Bones by Lisa De Nikolits.

The Wondrous Woo tells the story of Miramar Woo who is the quintessential Chinese girl: nice, quiet, and reserved. The eldest of the three Woo children, Miramar is ever the obedient sister and daughter ... on the outside.  On the inside, she’s a kick-ass kung fu heroine with rock star flash, sassy attitude, and an insatiable appetite for adventure.  Just as Miramar is about to venture forth on the real adventure of leaving home for university, her beloved father is killed in an accident.

Miramar watches helplessly as her family unravels in the aftermath of her father’s death.  Her mother is on the brink of a recurring paranoia that involves phantom hands. Her younger siblings suddenly and mysteriously become savants, in possession of uncanny talents nicknamed The Gifts. As her siblings are swept up into the fantastic world of fame and fortune and her mother fights off madness, Miramar is left behind, feeling talentless and abandoned with no idea who she really is or who she wants to become. She gets herself to university on a bus with no family to see her off, no hugs, and no support. She is utterly on her own.

In a story that spans four eventful years, Miramar ventures forth from the suburbs of Toronto to university in Ottawa and back again. Along the way she encounters people and situations light years apart from her sheltered world. She explores new friendships, lust, and a side of herself never seen before.  Ultimately, Miramar discovers the meaning of courage, belonging, and family.

The Wondrous Woo articulates a new voice that is at once displaced, but still squarely located in the centre of western and Chinese pop culture and everyday diasporic life. This novel joins other established novels in the increasingly popular genre of Chinese Canadian literature.

In The Witchdoctor’s Bones a group of tourists gather in Namibia. Some have come to holiday, others to murder. Canadian Kate ditches her two-timing boyfriend and heads to Africa on a whim, hoping for adventure, encountering the unexpected and proving an intrepid adversary to mayhem. The tour is led by Jono, a Zimbabwean historian and philosopher, and the travellers follow him from Cape Town into the Namib desert, learning ancient secrets of the Bushmen, the power of witchcraft and superstition, and even the origins of Nazi evil.

A ragged bunch ranging from teenagers to retired couples, each member of the group faces their own challenges as third world Africa pits against first world greed, murderous intent and thwarted desire. The battle between goaded vanity and frustrated appetite culminates in a surprising conclusion with shocking twists. With the bones of consequence easily buried in the shifting sands, a holiday becomes a test of moral character.

Unpredictable, flawed, fun-loving, courageous, bizarre, weak, kind-hearted and loathsome; the individuals in this novel exist beyond the page and into real life. Seamlessly weaving history and folklore into a plot of loss, passion and intrigue, the reader is kept informed and entertained as this psychological thriller unfolds.

Carrianne Leung is a fiction writer, educator and business owner who lives in Toronto with as much aplomb as she can muster. She holds a Ph.D. in Sociology and Equity Studies from oise/University of Toronto and teaches at Ontario College of Art and Design University. She is also the co-owner of Multiple Organics, an organic grocery store. She is co-editor, with Lynn Caldwell and Darryl Leroux, ofCritical Inquiries: A Reader in Studies of Canada (forthcoming, May 2013). She, her partner, their son and two dogs live in the west-end of Toronto.

Lisa de Nikolits, originally from South Africa,  has been a Canadian citizen since 2003. She has a Bachelor of Arts in English Literature and Philosophy and has lived and worked in the United States, Australia and Britain. As an art director, she has worked on marie claire,Vogue Australia, Vogue Living, Cosmopolitan and SHE magazines. Her first novel, The Hungry Mirror, was published by Inanna Publications in 2010 and was awarded the IPPY Gold Medal for literature on women’s issues in 2011, as well as long-listed for the 2011 ReLit Awards. Her second novel, West of Wawa, was published by Inanna in 2011 and was one of four Chatelaine Bookclub Editor’s Picks and was awarded the IPPY Silver Medal for Popular Fiction in 2012. Her third novel, A Glittering Chaos, was published by Inanna in 2013. Lisa lives and works in Toronto.