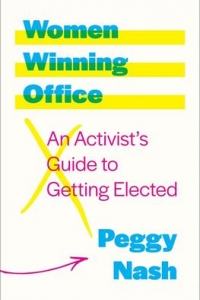 Join us for the Ottawa book launch of Women Winning Office: An Activists Guide to Getting Elected, by former NDP MP Peggy Nash. Featuring Peggy in conversation with fellow former Member of Parliament Megan Leslie.

When Peggy Nash first decided to run for elected office, she had no idea where to start, who to contact, or what the rules were. For those who are underrepresented in political life, politics can seem like a secret society designed to shut them out.

Women Winning Office is a practical handbook for activist women on how to open doors and take their place in the political process. Find out how to build a team, get nominated, inspire volunteers, and canvass voters. Nash draws on her experience in five federal campaigns, as well as the stories of many inspiring Canadian women who have run for office at all levels of government. Some succeeded; some did not. Some faced difficult and painful experiences. Every one of them would do it again.

To make real progressive change, we need to change not only who gets elected in Canada, but how our democracy functions. If you want to find out how to take your desire for a better world into elected office, this book is for you.

Women Winning Office will be available for sale at the launch, and Peggy will be signing copies. You can also order it now from Octopus Books.

Co-hosted by Between the Lines, Octopus Books, and sponsored by The Canadian Labour Congress and the Public Service Alliance of Canada.

Peggy Nash is an advocate for labour rights and social justice in Canadian politics and the labour movement, as a long-time senior negotiator for the CAW (now Unifor). A former president of the federal New Democratic Party, she was a candidate for leader after the untimely death of Jack Layton. A candidate in several federal elections, she served as a Member of Parliament and was named Official Opposition Industry and Finance Critic. Nash is an educator, a frequent media commentator, a founding member of Equal Voice and a co-founder of Toronto Metropolitan University’s Women in the House program.

Megan Leslie is the president and CEO of World Wildlife Fund Canada. Prior to joining WWF, Megan was a Member of Parliament and represented Halifax for two terms. As a passionate environmentalist, she was proud to assume the roles of environment critic for the Official Opposition, and vice-chair of the government committee on environment and sustainable development.