War: what is it good for? Co-launch of Disarming Conflict and Worth Fighting For with Ernie Regehr and Jessica Squires 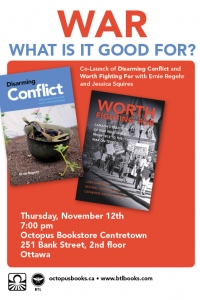 Between the Lines and Octopus Books present co-launch of two books about Canadian anti-war history and disarming conflict today:

Disarming Conflict: Why Peace Cannot Be Won on the Battlefield By Ernie Regehr

Wars fought over the past quarter century have been a spectacular failure. The overwhelming majority end in military stalemate and are settled at the negotiating table, with the grievances that led to the war still unresolved. In Disarming Conflict famed peace activist Ernie Regehr shows that force cannot simply override or transcend the social, political, and economic realities of conflict.

War prevention, Regehr argues, is more successful when security policies address the conditions that most directly affect people’s lives and that are most instrumental in generating deep grievances and the despairing conclusion that there are no alternatives to the violence. Disarming Conflict sets out approaches, initiatives, and policies that steer away from the futility of fighting and promote non-military efforts towards “winning the peace.”

Worth Fighting For: Canada’s Tradition of War Resistance from 1812 to the War on Terror Edited by Lara Campbell, Michael Dawson and Catherine Gidney

Historians, veterans, museums, and public education campaigns have all documented and commemorated the experience of Canadians in times of war. But Canada also has a long, rich, and important historical tradition of resistance to both war and militarization. This collection brings together the work of sixteen scholars on the history of war resistance. Together they explore resistance to specific wars (including the South African War, the First and Second World Wars, and Vietnam), the ideology and nature of resistance (national, ethical, political, spiritual), and organized activism against militarization (such as cadet training, the Cold War, and nuclear arms).

As the federal government continues to support the commemoration and celebration of Canada’s participation in past wars, this collection offers a timely response that explores the complexity of Canada’s position in times of war and the role of social movements in challenging the militarization of Canadian society. (more about this book: https://btlbooks.com/book/worth-fighting-for).