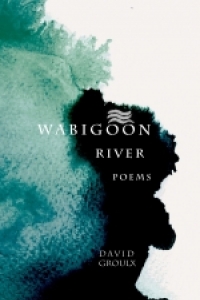 In partnership with Kegedonce Press and Harbour Publishing, we are thrilled to have 2 Ojibwey poets reading from their latest collection of poems: Wabigoon River Poems by David Groulx and The Thunderbird Poems by Armand Garnet Ruffo!

Written by award-winning writer David Groulx, Wabigoon River Poems is a ferocious, erudite collection centred around an epic poem "Wabigoon River Poem(s)" which is breathtaking in its unflinching and wide-ranging look at oppression, genocide, revolution, and survival. Wabigoon River Poems draws upon Indigenous knowledge and traditions while pushing at the boundaries of what readers might expect Indigenous poetry to be. It is masterful, engaging, bold, brilliant, fearless and daring.

Norval Morrisseau’s revered work has been honoured, copied and recognized throughout the art world and beyond. Less widely known but equally captivating is the artist’s personal life story, which poet and biographer Armand Garnet Ruffo related in his powerful narrative biography, Norval Morrisseau: Man Changing into Thunderbird (Douglas & McIntyre, 2014). Ruffo immersed himself in the life and work of the artist, gaining insight into the struggles and sources of inspiration underlying Morrisseau’s greatest works through research and interviews with the artist himself—a connection further strengthened by their shared Ojibway heritage.

His lengthy study of Morrisseau inspired Ruffo to write poems reflecting on both the works of art and the emotional context in which Morrisseau painted them. The Thunderbird Poems complements the highly evocative and poetic biography, delving into Morrisseau’s creative life through compressed, imagistic language, while untangling the complex and powerful threads of meaning, tradition and emotional power that resonate throughout Morrisseau’s strong lines and vibrant colours.

Significant themes in Morrisseau’s work are mirrored in The Thunderbird Poems: Ojibway legends, Morrisseau’s conflicted religious beliefs, political tensions between white and aboriginal Canadians. Significant moments in Morrisseau’s life are also traced along with the development of his artistic career. Deeply immersed in Morrisseau’s life story, and possessing thorough knowledge of the Ojibway storytelling traditions which grounded so much of the artist’s beliefs and creativity, Ruffo provides fresh poetic interpretations of the most renowned and striking works of one of Canada’s most celebrated painters.

David Groulx was raised in Northern Ontario. He is proud of his Aboriginal roots – Ojibwe Indian and French Canadian. After receiving his BA from Lakehead University, where he won the Munro Poetry Prize, David studied creative writing at the En’owkin Centre in Penticton, B.C., where he won the Simon J Lucas Jr. Memorial Award for poetry. He has also studied at the University of Victoria Creative Writing Program. David has had nine poetry books published – Night in the Exude (Tyro Publications: Sault Ste Marie, 1997); The Long Dance (Kegedonce Press, Neyaashiinigmiing, 2000);  Under God’s Pale Bones (Kegedonce Press, Neyaashiinigmiing, 2010); A Difficult Beauty (Wolsak & Wynn: Hamilton, ON 2011); Rising With A Distant Dawn (BookLand Press: Toronto, ON 2011); Imagine Mercy (BookLand Press: Toronto, ON 2013); These Threads Become A Thinner Light (Theytus Books, Penticton, BC 2014); and In The Silhouette Of Your Silences (N.O.N Publishing, Vancouver, BC 2014). Wabigoon River Poems is David's ninth title. (Kegedonce Press, Neyaashiinigmiing, 2015).

David won the 3rd annual Poetry NOW Battle of the Bards in 2011, and was a featured reader at the IFOA in Toronto & Barrie (2011), as well as Ottawa Writer’s Festival (2012). David has appeared on The Aboriginal Peoples Television Network and was the Writer-In-Residence for Open Book Toronto for November 2012.David’s poetry has been translated into Spanish & German. Rising With A Distant Dawn was translated into French; under the title, Le lever à l’aube lointaine, 2013.Red River Review nominated David's poems for Pushcart Prizes in 2012, and David’s poetry has appeared in over a 160 publications in 16 countries. He lives in Ottawa, Canada.

Armand Garnet Ruffo is the author of the biography Norval Morrisseau: Man Changing into Thunderbird (Douglas & McIntyre, 2014) and three books of poetry: Opening In The Sky (Theytus Books, 1994), Grey Owl: The Mystery of Archie Belaney (Coteau Books, 1997) andAt Geronimo’s Grave (Coteau Books, 2001). In addition to writing an award-winning film, A Windigo Tale (2010), he has also edited and co-edited (Ad)Dressing Our Words: Aboriginal Perspectives on Aboriginal Literatures (Theytus Books, 2001) and An Anthology of Canadian Native Literature in English (Oxford University Press, 2013). He is an associate professor in the Department of English Language and Literature at Queen’s University and lives in Kingston, Ontario.