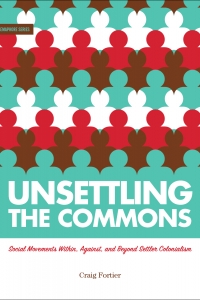 Craig Fortier, author of Unsettling the Commons: Social Movements Within, Against, and Beyond Settler Colonialism will be joined by writer and activist Fiona Jeffries who is also the author of Nothing to Lose But Our Fear: Resistance in Dangerous Times to discuss this book. Join us!

Drawing on interviews with 51 anti-authoritarian organizers to investigates what it means to struggle for “the commons” within a settler colonial context, Unsettling the Commons interrogates a very important debate that took place within Occupy camps and is taking place in a multitude of movements in North America around what it means to claim “the commons” on stolen land. Travelling back in history to show the ways in which radical left movements have often either erased or come into clear conflict with Indigenous practices of sovereignty and self-determination—all in the name of the “struggle for the commons”, the book argues that there are multiple commons or conceptualizations of how land, relationships, and resources are shared, produced, consumed, and distributed in any given society. As opposed to the liberal politics of recognition, a political practice of unsettling and a recognition of the incommensurability of political goals that claim access to space/territory on stolen land is put forward as a more desirable way forward.

Craig Fortier is an Assistant Professor in Social Development Studies at Renison University College, an affiliated college of the University of Waterloo. He holds a PhD in Sociology from York University. Craig has participated in migrant justice and anti-capitalist movements and in support of Indigenous sovereignty for over a decade in Toronto (Three Fires Confederacy, Haudenosaunee, and Huron-Wyandot territories). He is also the centre-fielder for the radical recreational softball team the Uncertainty and the author of the cat blog Diaries of a Cat Named Virtute.

Fiona Jeffries is a feminist scholar, educator and organizer working in the autonomist tradition. Currently an organizer with the Ottawa Sanctuary City Network, her work focuses on how people struggle against the differential vulnerabilities produced in capitalist society. Her book Nothing to Lose but Our Fear: Resistance in Dangerous Times was published by Between the Lines and Zed Books.