Three Feminists on Fear and Liberation in Canadian Politics 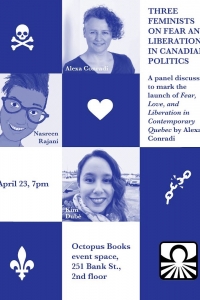 Nasreen Rajani and Kim Dubé join author Alexa Conradi in a conversation about themes in her new book Fear, Love and Liberation in Contemporary Quebec in a launch hosted by Octopus Books.

In response to rapid and unsettling social, economic, and climate changes, fearmongering now features as a main component of public life. Right-wing nationalist populism has become a hallmark of politics around the world. No less so in Canada.

In Fear, Love, and Liberation in Contemporary Quebec, Conradi invites us to take off our rose-coloured glasses and to examine Quebec’s sore spots. Through her personal reflections on Quebec politics and culture, she calls for a rethinking of politics of solidarity. Feminists from Quebec are not alone in having to address this turn in politics, all across Canada right-wing populists are in government or could soon be elected. Feminism offers some insights as to the ways forward.

This event is free to all at Octopus Books' accessible event space at 251 Bank St. on the 2nd floor.

Kim Dubé
Kim is coordinator of Prevention and Awareness Services at CALACS Francophone in Ottawa. She is a feminist, an activist, an Acadian and a Métis person. She is currently completing her doctorate in social work at the University of Ottawa. She sits on the Women's Event Network Committee and the FemAnVi Collective. She is also Chair of Jeunesse Idem, an organization in the Outaouais that provides services to queer youth.

Nasreen Rajani
Nasreen is an Instructor and a doctoral candidate at Carleton University. Her research looks broadly at online feminist activism in Canada and she is currently focused on the experiences of women of colour who are creating digital tools to end violence against women. Nasreen is also a Director and the Communications Chair of WISE (Women’s Initiatives for Safer Environments) in Ottawa.

Alexa Conradi
Alexa is best known for work as chair and spokeswoman of the Fédération des femmes du Québec (Quebec Women's Federation) from 2009-2015. She is a founding member of Québec solidaire and acted as its first president from 2006-2009. With an MA in Communication Studies from Concordia University that focused on discourses of reconciliation, Alexa is committed to decolonization and true justice for indigenous people. Living in Germany, she works internationally as a freelancer.

Reviews of the book:

"Alexa Conradi’s new book Fear, Love, and Liberation in Contemporary Quebec is a must read for anyone interested in the challenges of contemporary feminism. She explores some of the most difficult issues facing modern feminism through the lens of inclusion, challenging some of our old thinking and providing guidance based on a broad base of personal and intellectual knowledge in a most accessible and enjoyable form."
- Judy Rebick

“It’s a brave person who dares to shine a light into the corners of Quebec society, uncovering contradictions and flaws that so many would rather deny exist. Feminist and activist Alexa Conradi has never been one to shy away from difficult topics. The Anglophone Quebecer, who learned to love and live comfortably with the other solitude, is sure to make some readers angry with this well-written,thoroughly documented book, mais tant mieux!”
– Sue Montgomery, Mayor of CDN-NDG, Montreal and co-creator of #BeenRapedNeverReported

“Analyzing the problems of Quebec society, from a feminist decolonial perspective, the author proposes a critical vision largely nourished by her activist experience and appropriately invites to address the hard questions and thus raise the level of public debate.”
– Diane Lamoureux, Associate Professor, Université Laval