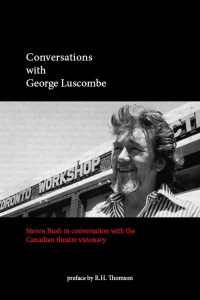 A panel of practitioners will discuss the interconnection between Education, Activism and Theatre and some of the challenges we face in 2014 in all these areas. Panelists: Lib Spry, Donna-Michelle St. Bernard, Jody Essery, J. Douglas Campbell & Steven Bush, with Nick Aplin chairing.

Question & Answer time and Free Discussion with the audience will follow the panelists’ presentations.

Light refreshments will be available.

Copies of Conversations with George Luscombe: Steven Bush talking with the Canadian Theatre Visionary will be available for purchase and signing.  The book includes an audio CD excerpted from the original chats between Steven and George.

“Conversations with George Luscombe provides an unprecedented insight into the theory and the practice and the spirit and the wisdom of a unique Canadian theatre director. It should be on the compulsory reading list of every school of Drama and on the shelf of every actor.” - Jack Winter, Poet, Teacher & longtime Resident Playwright at TWP.

Steven Bush has clocked half a century in professional performing arts - as an actor on stage, radio & film; theatre director & dramaturge; teacher; co-founder/director of Mixed Company Theatre (1981-88); and as Artistic Director of Great Canadian Theatre Company (1988-1992). As an instructor at University College Drama Program (University of Toronto) for almost twenty years, Steven directed Mad Forest and The Trojan Women as well as many works by Euripides, Shakespeare, Maxim Gorki, Tennessee Williams and, most recently, scenes from Edward Bond’s The Chair Plays. For Pandemic Theatre he co-directed an ensemble staging of Heathcote Williams’ Autogeddon; and performed in Modern Times Stage Company’s Hallaj – named by NOW magazine as one of the ten best shows of the 2011 season.

Steven is co-author of the published plays Richard Thirdtime, Available Targetsand Life on the Line. Talonbooks has published his documented performance text Beating the Bushes and Conversations with George Luscombe: Steven Bush talking with the Canadian theatre visionary was released by Mosaic Press in 2013.

J. Douglas Campbell was born and raised in western Canada. He did a good deal of theatre during his high school days, but stopped doing so while he earned a degree in English Literature at the University of Alberta. After a year in graduate school in Toronto, he realized that he had left an important part of himself behind, and when he saw a note in the newspaper concerning an actor named George Luscombe, who had returned to Canada after a few years working in England, and who intended to establish an actor training workshop, he got in touch, and his life was changed. George taught him the most important things he knows.

After three years with George, however, the necessity to support his family led him into teaching high school English. Eventually he moved into teaching at the university level, first at Mount Allison University in Sackville, New Brunswick, and then at Carleton University in Ottawa, where he taught for thirty years. Although in both these schools he was a member of the English Department, he eventually found himself focussing mostly on theatre, and in addition to teaching practical theatre courses, was given the opportunity to direct many extra-curricular plays. He also did a good deal of acting in the Ottawa theatre community during his years at Carleton.

Interview with the Author

A Conversation with Steven Bush