The Inconvenient Truth about Harper’s Canada 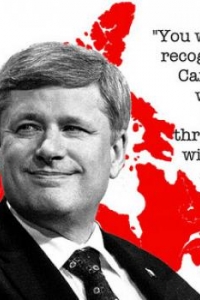 Moderated by Kathleen Monk, a prominent media commentator on politics and public affairs, Kathleen appears regularly on CBC The National’s The Insiders.

Ticket: $10 for general admission, $5 for students and low-income.

Books by Michael Harris and Donald Gutstein will be available for purchase and for author signing.

Co-sponsored by Octopus Books, National Union of Public and General Employees, Public Service Alliance of Canada and the Council of Canadians.

It has been nine years since Stephen Harper, the leader of Conservative Party, became the Prime Minister of Canada in 2006. Looking back at these nine years, what do you think of Canada becoming an increasingly authoritarian war nation under Harper’s regime? Why does Mr. Harper consistently and deliberately erode our already limited democracy, undermine our Charter of Rights and Freedoms, and seem determined to put our collective future up for sale, left to the whims of the market? What drives his obsession with the economy that he willingly disregards the welfare of all Canadians except the rich and ultra-rich?

Is our country at a crossroads?

Considering the recent introduction and fast-tracking of Bill C-51, the so-called Anti-Terrorism Act, the idea of another four years under Stephen Harper should be concerning to anyone who cares about civil liberties, human rights, and democracy.

We need to act now to Stop Harper! Together, we can!

Party Of One: Stephen Harper And Canada's Radical Makeover by Michael Harris: In Party of One, investigative journalist Michael Harris closely examines the majority government of a prime minister essentially unchecked by the opposition and empowered by the general election victory of May 2011. Harris looks at Harper’s policies, instincts, and the often breathtaking gap between his stated political principles and his practices. Harris argues that Harper is more than a master of controlling information: he is a profoundly anti-democratic figure. … Against the backdrop of a Conservative commitment to transparency and accountability, Harris exposes the ultra-secrecy, non-compliance, and dismissiveness of this prime minister. And with the Conservative majority in Parliament, the law is simple: what one man, the PM, says, goes.

Harperism: How Stephen Harper and his think tank colleagues have transformed Canada by Donald Gutstein: Margaret Thatcher transformed British political life forever. So did Ronald Reagan in the United States. Now Canada has experienced a similar, dramatic shift to a new kind of politics, which author Donald Gutstein terms Harperism. … The success of Harperism is no accident. Donald Gutstein documents the links between the politicians, think tanks, journalists, academics, and researchers who nurture and promote each other's neo-liberal ideas. They do so using funds provided by ultra-rich U.S. donors, by Canadian billionaires like Peter Munk, and by many big corporations--all of whom stand to gain from the ideas and policies the Harperites develop and push.

This book casts new light on the last ten years of Canadian politics. It documents the challenges that Harperism--with or without Stephen Harper--will continue to offer to the many Canadians who do not share this pro-market world view.

MICHAEL HARRIS is a writer, investigative journalist, and documentary filmmaker. He was awarded a Doctor of Laws for his “unceasing pursuit of justice for the less fortunate among us.” His books include Justice Denied, Unholy Orders, Rare ambition, Lament for an Ocean, Con Game, and the latest best seller Party of One: Stephen Harper and Canada’s Radical Makeover. His work has sparked four commissions of inquiry, and three of his books have been made into films.

DONALD GUTSTEIN has written four books on the links between large corporations, politics, and the media. His previous book, Not A Conspiracy Theory, is a history of the Fraser Institute and other think tanks. Gutstein writes for The Tyee, Georgia Straight, and rabble.ca. He is an adjunct professor in the School of Communication at Simon Fraser University and co-director of NewsWatch Canada, a media-monitoring project.