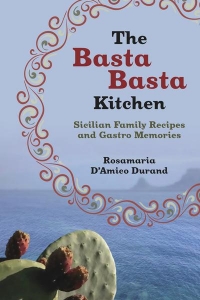 The Basta Basta Kitchen Cookbook: Sicilian Family Recipes and Gastro Memories is a book of family memories around the table and in the kitchen. It weaves biography, history, food and recipes. In this unique book, author Rosamaria D'Amico Durand who lives in Ottawa tells us the stories behind the recipes that are as important as the recipes themselves.

Please join us on October 23rd evening as Rosamaria will be visiting the store to talk about Sicily’s culinary heritage! There will be refreshments and snacks!

Rosamaria is an amazing storyteller!

Copies of the Basta Basta Kitchen Cookbook will be available for purchase and to be signed!

Rosamaria D'Amico Durand had lived in many countries before settling in Ottawa. She has three children. Proudly Canadian with deep roots in Sicily, she is at home on both sides of the Pond and has cooked her way through Canada, Italy, France, Vietnam, Morocco and the U.S. Following on two other books on family stories and heritage, this is her first and last cookbook!