The Harper Record on trial 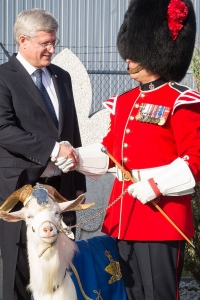 “You wont recognize Canada when I’m through with it”: The Harper Record on trial

Since Stephen Harper's Conservatives were elected as the majority government in 2011, Canada has gone through dramatic shifts in political power and direction. The prime minister himself once promised, when he was through with Canada, we wouldn't recognize it. In light of an upcoming announcement on the federal budget in April, a looming federal election in the fall, and increasing concerns about our social-economic-political future and the state of democracy under Harper's regime, Rabble.ca and Octopus Books are co-hosting an event that will attempt to understand how Harper has changed Canada, and to discuss how we should respond at this critical time for our country.

We will be joined by three prominent reporters and writers:

Karl Nerenbert's book Harper vs. Canada: Five Ways of Looking at the Conservative Regime and Mark Bourrie's Kill the Messengers: Stephen Harper’s Assault on Your Right to Know will be available for purchase and author signing.

Harper vs. Canada brings together a selection of Karl's work in rabble.ca to shed light on federal politics during Harper's time in majority government -- to map out the ways in which Harper, true to his promise, has effectively changed the fabric of the country. The book looks at the Harper regime from five perspectives: Democracy; Foreign Affairs; Environment; First Nations; and Refugees, Migrant Workers and Immigration. While not a complete rendering of Harper's changes in the last three years (or Karl's work covering them), each of these areas encapsulates central policy directions and changes under the Harper Conservatives.

In Kill the Messengers: Stephen Harper's Assault on Your Right to Know, Mark Bourrie exposes how trends have conspired to simultaneously silence the Canadian media and elect an anti-intellectual government determined to conduct business in private. Drawing evidence from multiple cases and examples, Bourrie demonstrates how budget cuts have been used to suppress the collection of facts that embarrass the government’s position or undermine its ideologically based decision-making. Kill the Messengers is not just a collection of evidence bemoaning the current state of the Canadian media, it is a call to arms for informed citizens to become active participants in the democratic process.