The Carbon Bubble, Jeff Rubin In Conversation with Frank Koller 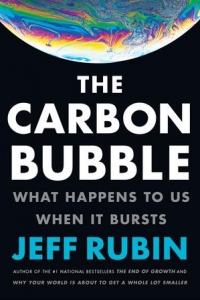 Since 2006 and the election of the 1st Harper government, the vision of Canada's future as an energy superpower has driven the political agenda, as well as the fast-paced development of Alberta's oil sands and the push for more pipelines across the country to bring that bitumen to market. Anyone who objects is labeled a dreamer, or worse--an environmentalist: someone who puts the health of the planet ahead of the economic survival of their neighbours.

In The Carbon Bubble, Jeff Rubin compellingly shows how Harper's economic vision for the country is dead wrong. Changes in energy markets in the US--where domestic production is booming while demand for oil is shrinking--are quickly turning Harper's dream into an economic nightmare. The same trade and investment ties to oil that pushed the Canadian dollar to record highs are now pulling it down, and the Toronto Stock Exchange, one of the most carbon-intensive stock indexes in the world--with over 25 percent market capitalization in oil and gas alone--will be increasingly exposed to the rest of the world's efforts to reduce carbon emissions.

Rubin argues that there is a lifeline to a better future. The very climate change that will leave much of the country's carbon unburnable could at the same time make some of Canada's other resource assets more valuable: our water and our land. In tomorrow's economy, he argues, Canada won't be an energy superpower, but it has the makings of one of the world's great breadbaskets. And in the global climate that the world's carbon emissions are inexorably creating, food will soon be a lot more valuable than oil.

Jeff Rubin is an award-winning economist and author of The End Of Growth and Why Your World Is About To Get A Whole Lot Smaller. He was the Chief Economist at CIBC World Markets for twenty years, and was one of the first economists to accurately predict soaring oil prices back in 2000 and is now one of the world's most sought-after energy experts. He lives in Toronto.