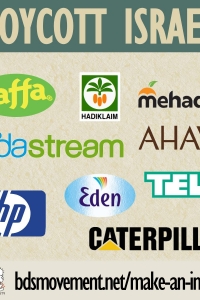 On February 22 2016, Prime Minister Justin Trudeau's Liberal government joined forces with the official opposition Conservatives  to condemn Canadian organizations, groups and individuals who promote Boycott, Divestment and Sanctions (BDS) with reference to Israel. BDS was initiated in 2005 by Palestinian civil society as a strategy for compelling Israel to comply with international law and universal principles of human rights.

Why then is BDS viewed so negatively by both Liberals and Conservative MPs?

And why are they so eager to silence those who support it?

In this Community Classroom led by Bill Skidmore, a professor with the Human Rights program at Carleton University, we will discuss:

Bill Skidmore has taught human rights courses at Carleton University for 22 years, and primarily focuses on political violence and persecution. He spent parts of two sabbatical leaves in the West Bank of the Occupied Palestinian Territories, most recently in 2014-15 when he contributed to the research program of the Palestinian human rights organization Addameer, which specializes in the protection of political prisoners.