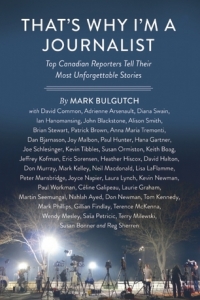 Canadian journalism has a proud and independent history that all Canadians rely on. Perhaps that is one of the reasons we respond so viscerally to stories that involve any of our journalists acting in ways that undermine their credibility and our faith in them.

Our relationship with reporters is as complex as the one between a news story and the journalist. In That’s Why I’m a Journalist MARK BULGUTCH provides an opportunity for a more personal perspective from these familiar and trusted journalists. Many of these behind-the-scenes accounts of the most memorable stories of their careers involve high-profile events of the 20th and 21st centuries, from the fall of the Berlin Wall to 9/11; but there are also reflections on quieter and more intimate moments of deep personal impact.

That’s Why I’m a Journalist acts as a counter-point to the third-hand and simplified “news lite” that is gathered from social media and wire services. It is a reminder that journalism is powerful and revelatory when in the hands of thoughtful and curious journalists who will drop everything to attend to a story and who often risk their lives to bring Canadians the news.

Author Mark Bulgutch will be joined by Chris Waddell, a Carleton professor at The School of Journalism, and former Globe &Mail and CBC journalist/editor) to discuss about the current state of media in Canada.

MARK BULGUTCH started his decades-long career in journalism as a paperboy. After journalism school (Carleton 1974) he spent over 35 years at CBC as a reporter, producer, and editor, including 11 years as senior editor of The National, finally retiring from his last position as Senior Executive Producer of TV News, where he covered the election debates of 2004/2006/2008/2011 – no word on how he feels about missing the 2015 election debates! He is the recipient of 13 Gemini awards, 4 RTNDA Awards, the Canadian Journalism Foundation Award of Excellence and the Canadian Association of Broadcasters Gold Ribbon Award. He has taught journalism at Ryerson University since 1987. He lives, reads, watches and listens to the news in Toronto.