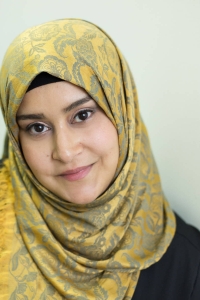 S.K. will talk about her YA novels, Saints and Misfits and Love from A to Z, and discuss creative writing, the writing process and author life.

S. K. Ali is the author of Saints and Misfits, a finalist for the American Library Association’s 2018 William C. Morris award. Her debut novel won critical acclaim for its portrayal of an unapologetic Muslim-American teen’s life. Saints and Misfits was featured on several Best Teen Novels of 2017 lists including from Entertainment Weekly, Kirkus Reviews and the New York Public Library. It was also a CBC Canada Reads 2018 longlist title.

She holds a degree in Creative Writing from York University and has written about Muslim life for various outlets, including the Toronto Star and NBC News. Her second novel, Love From A to Z, a story about finding love in the time of Islamophobia. She also has a picture book, The Proudest Blue, co-authored with Ibtihaj Muhammad.

S. K. Ali lives in Toronto with her family and a very vocal cat named Yeti.