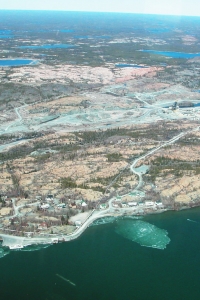 Kevin will tell the story of the Giant Mine in Yellowknife, NWT. After a conflict-ridden history the mine shut down in 1999 leaving 237,000 tonnes of lethal arsenic trioxide inadequately stored underground threatening the water of Great Slave Lake and the health of the community. Canadian citizens are now on the hook to try to remediate the mess and Kevin has been on the front lines working as a volunteer with Alternatives North, overseeing the review of the remediation plan.

Bruce Maclean works with the Athabasca Chipewyan and Mikisew Cree First Nations monitoring the impacts of tar sands and other developments on the Athabasca watershed. His work brings together western science with the indigenous science of elders. Bruce will discuss the impacts of development on the First Nations and their efforts to confront the industries that threaten the health of their lands and waters.

The event is being organized as part of MiningWatch's celebration for our 15 years of activism in support of mining affected communities.

We will pass a basket for donations.

Kevin O'Reilly has resided in Yellowknife, N.W.T. since 1985 working for Aboriginal, federal and territorial government agencies on land use planning, environmental assessment and resource management. He served as Research Director for the Canadian Arctic Resources Committee from 1995 to 2005. He now works for an independent oversight body on one of Canada's diamond mines. He holds a BES in Environmental Studies and an MA in Urban and Regional Planning from the University of Waterloo. Kevin has had extensive involvement in the environmental assessment and regulation of mining in the N.W.T. He served on Yellowknife City Council 1997-2006.

Bruce Maclean is a research associate with the Centre for Indigenous Environmental Resources (CIER) located in Winnipeg, Canada. His principal responsibilities there include providing education and assistance to First Nations in Manitoba interested in the conservation of fish habitat. He also provides guidance to communities, Aboriginal and other, in dealing with abandoned mines. Bruce assists communities in checking their water quality and the health of fish in their area through an approach that combines Indigenous Knowledge and western science. He has a strong understanding of the meaningful involvement of Aboriginal people in the environmental assessment process. Bruce has experience working in Mexico and Ecuador on habitat conservation. He holds an environmental science degree from the University of Manitoba. Bruce lives in Winnipeg with his wife and two children.

MiningWatch Canada is a pan-Canadian initiative supported by environmental, social justice, Aboriginal and labour organisations from across the country. We were created by our founding members in 1999 to address the need for a co-ordinated public interest response to the threats to public health, water and air quality, fish and wildlife habitat and community interests posed by irresponsible mineral policies and practices in Canada and around the world.

More about their 15 years of achievements: http://www.miningwatch.ca/.