TALES FROM THE MARGINS LOOKING IN 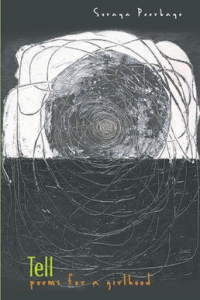 The readings by Soraya Peerbaye  (Tell: Poems for a Girlhood) and charles c. smith (Travelogue of the bereaved) explore the locations of Brown and Black in the Canadian landscape as they confront and struggle with identities, relationships and violence historically and in our times.

Soraya Peerbaye's first collection, Poems for the Advisory Committee on Antarctic Names (Goose Lane Editions, 2009), was nominated for the Gerald Lampert Award. Tell: Poems for a Girlhood (Pedlar Press, 2015) is her second collection. Her poems have previously appeared in Red Silk: An Anthology of South Asian Women Poets (Mansfield Press, 2004), edited by Priscila Uppal & Rishma Dunlop, as well as big boots (eds. Una Lee & Souvankham Thammavongsa), Other Voices, Prism and The New Quarterly; she has also contributed to the chapbook anthology Translating Horses (Baseline Press). She holds an MFA in Creative Writing from the University of Guelph.

Tell is a collection of poems partially based on the Reena Virk murder case. Reena Virk was a girl of South Asian descent who was murdered on November 14th, 1997, in Saanich, British Columbia. At least eight young people participated in the initial assault, while more looked on. Seven of her assailants were girls; five were white. Virk rose from that beating and walked north across a bridge toward home. Her drowned body was found in the Gorge Waterway, in a Victoria, BC suburb. In Tell: poems for a girlhood, without a trace of sentimentality and with heart-wrenching courage, Soraya Peerbaye gathers evidence into an entire poetic vision of contemporary adolescent fury and angst. The poems examine in part the poet's remembrances of girlhood, the unease of adolescence, and the circumstances that enable some to pass through unhurt.

charles c. smith is a published poet, playwright and essayist who has written and edited thirteen books.  He won second prize for his play Last Days for the Desperate from Black Theatre Canada, has edited three collections of poetry, has four published books of poetry – including Partial Lives- Williams Wallace Press, and travelogue of the bereaved, Mawanzi House (formerly TSAR Publications) - and his poetry has appeared in numerous journals and magazines, including Poetry Canada Review, the Quille and Quire, Descant, Dandelion, the Amethyst Review, Bywords, Canadian Ethnic Studies and others.  he has received grants from the Ontario Arts Council and the Toronto Arts Council for both his poetry and for his work with the ‘wind in the leaves collective’ where he is artistic director of a multidisciplinary performance group involving dance, image, recorded and live music based on his poetry.

It is Smith’s voice that counts here, and the techniques he uses, akin to those of jazz. His stories say much about our times and their foundations, recreating figures such as Marie Josephe Angelique, Viola Desmond, John Brown, Maryann Shadd, and Mumia. The weaving between sections, and the forms used expose the transhistorical so that each particular narrative is linked to a more telling composition.

These are marvellous poems, deft, rich, searching, and with remarkable range: tender in recalling her father’s French and Creole roots, spare and brilliant in depicting the landscape of Antarctica. For Peerbaye words connect lives across time and space. Reading her poems sharpens our own connection with the world. — John Steffler, author of The Grey Islands