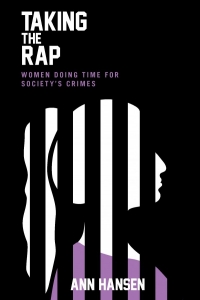 When Ann Hansen was arrested in 1983 along with the four other members of the radical anarchist group known as the Squamish Five, her long-time commitment to prison abolition suddenly became much more personal. Now, she could see firsthand the brutal effects of imprisonment on real women’s lives.

During more than thirty years in prison and on parole, the bonds and experiences Hansen shared with other imprisoned women only strengthened her resolve to fight the prison industrial complex. In Taking the Rap, she shares gripping stories of women caught in a system that treats them as disposable-poor women, racialized women, and Indigenous women, whose stories are both heartbreaking and enraging. Often serving time for minor offences due to mental health issues, abuse, and poverty, women prisoners are offered up as scapegoats by a society keen to find someone to punish for the problems we all have created.

Ticket: $10 or PWYC. Advanced tickets are available online or in person at Octopus Books (116 Third Ave.)

“Taking the Rap reveals in sometimes excruciatingly vivid detail the injustices and inequalities heaped on women as a result of social, economic, and legal systems that privilege those in power, particularly those who are what a Maori friend refers to as the “male, pale, and stale” crowd. Her passionate alliance with the women whose struggles she shares provides readers with a rare vantage point from which to examine the impoverishment of a legal system that is too often devoid of justice.” – Kim Pate, independent senator of Canada and former executive director of the Canadian Association of Elizabeth Fry Societies

Ann Hansen served seven years of a life sentence in federal prisons. She is a prison abolition activist and author of Direct Action: Memoirs of an Urban Guerrilla.

Senator Kim Pate was formerly the executive director of the Canadian Association of Elizabeth Fry Societies. In 2014, she was named a Member of the Order of Canada for advocating on behalf of women who are marginalized, victimized, criminalized or institutionalized, and for her research on women in the criminal justice system. She was appointed to the Senate of Canada on November 10, 2016. She is a member of the Independent Senators Group.