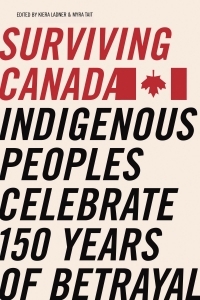 Surviving Canada: Indigenous Peoples Celebrate 150 Years of Betrayal is a collection of elegant, thoughtful, and powerful reflections about Indigenous Peoples’ complicated, and often frustrating, relationship with Canada, and how—even 150 years after Confederation—the fight for recognition of their treaty and Aboriginal rights continues.

Through essays, art, and literature, Surviving Canada examines the struggle for Indigenous Peoples to celebrate their cultures and exercise their right to control their own economic development, lands, water, and lives. The Indian Act, Idle No More, and the legacy of residential schools are just a few of the topics covered by a wide range of elders, scholars, artists, and activists.

Please join us and the editors and local contributors of this book, Kiera L. Ladner, Myra Tait, Kahente Horn-Miller, Waneek Horn-Miller and Hayden King, for a discussion of this book.

Ticket: $10 available at the door and at Octopus Books (116 Third Ave.) --> online ticketing is closed. There is still space available. Please purchase at the door. Thanks!

Copies of Surviving Canada will be available for purchase and author signing.

Kiera L. Ladner is an Associate Professor and former Canada Research Chair in Indigenous Politics and Governance in the Department of Political Studies at the University of Manitoba. She received her PhD from Carleton University in 2001. Alongside Leanne Simpson, she held a position at Trent from 2000- 2002. She is a leading scholar in the field of Indigenous politics and is widely published in Canada, Australia, the United States and Mexico. Kiera is also the co-editor of This Is An Honour Song – Twenty Years Since the Blockades.

Myra Tait is a member of Berens River First Nation and mother of four children. She has a law degree from the University of Manitoba, and in 2017, completed her Master of Laws degree on Aboriginal taxation and treaty interpretation. Myra is employed at a major law firm in Winnipeg, but continues to work with Mamawipawin’s Comparative Indigenous Constitutional Project at the University of Manitoba. Myra’s work brings a legal perspective to the project and she has done field research in New Zealand and Australia.

Kahente Horn-Miller (Kahente means “she walks ahead”) (Kanien:keha’ka/Mohawk) is an Assistant Professor in the School of Canadian Studies at Carleton University where she teaches Indigenous Studies. Her performances, governance work and community-based research involve interpreting Haudenosaunee culture and bringing new life to old traditions. It is the fruit of her endeavors as a Mohawk, an educator, and a mother that she brings into her interactions with Onkwehonwe (original peoples) and the academic community. Academics for her is not only about theorizing the issues that Indigenous peoples face as a way to find solutions; it is also about putting these theories in to practice. She does this most specifically through her rematriation work in the retelling of the Sky Woman Narrative, the active work of teaching consensus building and in the classroom. It is also through writing, research, performances and teaching that she challenges others to learn about Indigenous cultures and about themselves as humans, which in the long term fosters relationships between Indigenous and non-native peoples that will go beyond the written word and the classroom and research settings and reconnects us to the realities of reinvigorating Indigenous traditions in the modern world.

Hayden King is from Beausoleil First Nation on Gchi’mnissing in Huronia, Ontario. Hayden has been teaching Indigenous politics and policy since 2007 with academic positions at McMaster, Carleton and most recently Ryerson University. His research and commentary on Indigenous nationhood and colonialism in Canada has been published widely. Hayden has also served as the Senior Policy Advisor to the Ontario Ministry of Aboriginal Affairs, Director of Research at the Canadian Council for Aboriginal Business, Scholar-in-Residence at the Conference Board of Canada, and Senior Fellow at Massey College. He is the co-founder of the language-arts collective, Ogimaa Mikana.