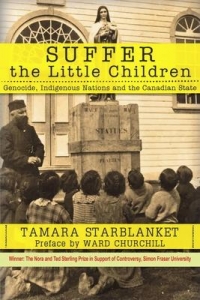 Join us on Truth and Reconciliation Day for an online conversation with legal scholar Tamara Starblanket on genocide, Indigenous Nations and the Canadian state. Hosted by Ketty Nivyabandi, Secretary General of Amnesty International Canada (English speaking Branch), and Octopus Books.

Many settler Canadians have expressed shock at the findings of ground penetrating radar at the sites of former residential schools across the country, which have revealed the remains of thousands of Indigenous children kidnapped by the colonial state from their homes and families and Nations. These horrifying “discoveries” are already known to Indigenous Nations attempting for years to get justice.

Justice as defined by the Canadian and international legal systems is far from adequate. Tamara Starblanket carefully prepared her master’s thesis on this issue, which became the book Suffer the Little Children: Genocide, Indigenous Nations, and the Canadian State (Clarity Press, 2018).

This powerful work turns the western legal system against itself despite the shortfalls of legal recourse that were founded in colonialism and imperialism. Yet, her work does demonstrate the Canadian state is culpable for genocide and violates international customary law.  It explains in detail how the crime of genocide was conceptualized following World War 2 by the international community, how colonial countries, including Canada, sought to shield themselves against possible prosecution and sidestep the link between cultural genocide and colonialism.

Tamara Starblanket is Spider Woman, a Nehiyaw iskwew (Cree woman) from Ahtahkakoop First Nation in Treaty Six. Tamara holds an LLM (Master of Laws) from the University of Saskatchewan, and an LLB from the University of British Columbia. She is the Dean of Academics at Native Education College on the unceded lands of the xʷməθkʷəy̓əm (Musqueam), Sḵwx̱wú7mesh (Squamish), Səl̓ílwətaʔ/Selilwitulh (Tsleil-Waututh) Nations or what is commonly referred to as Vancouver, BC. Starblanket is the recipient of the 2020 Nora and Ted Sterling Prize in Support of Controversy for her book Suffer the Little Children: Genocide, Indigenous Nations and the Canadian State.