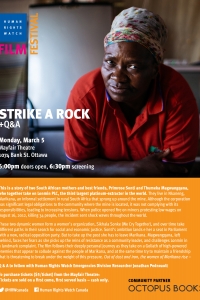 This is a story of two South African mothers and best friends, Primrose Sonti and Thumeka Magwangqana, who together take on Lonmin PLC, the third largest platinum-extractor in the world. They live in Nkaneng, Marikana, an informal settlement in rural South Africa that sprung up around the mine. Although the corporation has significant legal obligations to the community where the mine is located, it was not complying with its responsibilities, leading to increasing tensions. When police opened fire on miners protesting low wages on August 16, 2012, killing 34 people, the incident sent shock waves throughout the world.

These two dynamic women form a women’s organization, Sikhala Sonke (We Cry Together), and over time take different paths in their search for social and economic justice. Sonti’s ambition lands her a seat in Parliament with a new, radical opposition party. But to take up the post she has to leave Marikana. Magwangqana, left behind, faces her fears as she picks up the reins of resistance as a community leader, and challenges Lonmin in a landmark complaint. The film follows their deeply personal journey as they take on a Goliath of high-powered enemies that appear to collude against the people of Marikana, and at the same time try to maintain a friendship that is threatening to break under the weight of this pressure.

To purchase tickets ($5/ticket) from the Mayfair Theatre: Tickets are sold on a first come, first served basis – cash only.