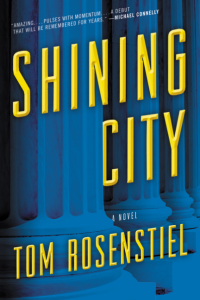 Tom Rosenstiel, head of the Washington-based American Press Institute, will be in Ottawa to launch his first work of fiction, the political thriller Shining City, and also to launch into a discussion of the stranger than fiction world of the news media and the Trump presidency.

An author, journalist, researcher and media critic, Tom Rosenstiel is a widely recognized thinker on the future of media. Before joining the American Press Institute in January 2013, he was founder and for 16 years director of the Project for Excellence in Journalism at the Pew Research Center in Washington, D.C., and co-founder and vice chair of the Committee of Concerned Journalists.

He is the author of seven books, including The Elements of Journalism: What News People Should Know and the Public Should Expect.

Shining City, is his first work of fiction, a thriller and murder mystery set against the backdrop of the confirmation of a U.S. Supreme Court justice.

This event, hosted by Carleton University's School of Journalism and Communication and iPolitics, is open to the public but space is limited, so please register in advance at http://bit.ly/2nbjVQb

Copies of Shining City will be available for purchase and author signing.