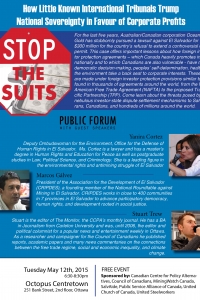 Anyday, three corporate lawyers deliberating at a little known tribunal housed in the World Bank will decide if El Salvador has to pay Australian/Canadian mining firm OceanaGold US$301 million (up to 5% of its GDP) for the country’s refusal to grant a controversial gold mining permit. This case offers important lessons about how foreign investor protection agreements – which Canada heavily promotes internationally and to which Canadians are also vulnerable - have made democratic decision-making, peoples’ self-determination, health and the environment take a back seat to corporate interests. These suits are made under foreign investor protection provisions similar to those found in thousands of agreements around the world, from the North American Free Trade Agreement (NAFTA) to the proposed Trans Pacific Partnership (TPP). Come learn about the threats posed by these nebulous investor-state dispute settlement mechanisms to Salvadorans, Canadians, and hundreds of millions around the world.

Yanira Cortez, Deputy Attorney for the Environment for the Salvadoran Human Rights Ombudsman's Office, where she has worked since 2004 with a focus on the environment, especially mining, water, and human rights.
Marcos Gálvez, National President of the Association for the Development of El Salvador (CRIPDES), a founding member of the National Roundtable against Mining in El Salvador.
Stuart Trew, Editor of The Monitor, the Canadian Centre for Policy Alternative’s monthly journal, and former trade campaigner for the Council of Canadians.