South Africa’s Corporatised Liberation: A Critical Analysis of the ANC in Power with Dale T. McKinley 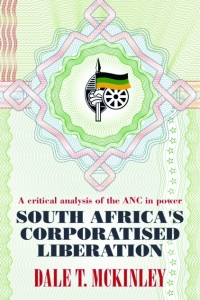 Despite the more general social, political and economic advances that have been made under the ANC’s rule since 1994, power has not only remained in the hands of a small minority but has increasingly been exercised in service to capital. This has seen the ANC become the key political vehicle, in party and state form as well as application, of corporate capital; both domestic and international, black and white, local and national and constitutive of a range of different fractions. As a result, ‘transformation’ has largely taken the form of macro-acceptance of, combined with micro-incorporation into, the capitalist system, now minus its specific and formal apartheid frame. What has happened in South Africa over the last twenty-two years is the corporatisation of liberation; the generalised political and economic commodification of society and its development; with all the attendant impacts on governance, the exercise of power, the understanding and practice of democracy as well as political, economic and social relations.

Dale T. McKinley is an independent writer, researcher and lecturer as well as political activist. Born and raised in Zimbabwe, he has been based in Johannesburg since 1991. Dale is a long-time political activist and has been involved in social movement, community and political struggles for over three decades. He holds a PhD. in Political Economy/African Studies from the University of North Carolina (Chapel Hill), USA.