Songs Upon the Rivers Book Launch with Co-Author Sébastien Malette 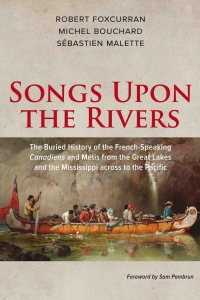 Join us for an evening with author Sébastien Malette to discuss his latest book Songs Upon the Rivers: The Buried History of the French-Speaking Canadiens and Métis from the Great Lakes and the Mississippi across to the Pacific.

Long before the Davy Crocketts, the Daniel Boones and Jim Bridgers, the French had pushed far west and north establishing trade and kin networks across the continent. They founded settlements that would become great cities such as Detroit, Saint Louis, and New Orleans, but their history has been largely buried or relegated to local lore or confined to Quebec.

Foxcurran, Bouchard, and Malette scrutinize primary sources and uncover the alliances, organic links and métissage, or mixing, between early French settlers and voyageurs and the indigenous nations. It began with the founding of New France by Samuel de Champlain in the early 1600s and continued well into the 19th century long after France was no longer a force in North America.

The authors have combined keen and accessible story telling with vintage maps, forgotten documents (such as the little known writings of Alexis de Tocqueville), and old photos or paintings. What they have discovered and now recount will propel the story of the peoples engendered—and still thriving—, their French lingua franca, and their ways of life back into the heart of the narrative of North American history where they belong.