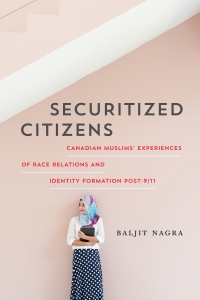 Uninformed and reactionary responses in the years following the events of 9/11 and the ongoing ‘War on Terror’ have greatly affected ideas of citizenship and national belonging.

In Securitized Citizens, Baljit Nagra, develops a new critical analysis of the ideas dominant groups and institutions try to impose on young Canadian Muslims and how in turn they contest and reconceptualize these ideas. Nagra conducted fifty in-depth interviews with young Muslim adults in Vancouver and Toronto and her analysis reveals how this group experienced national belonging and exclusion in light of the Muslim ‘other’, how they reconsidered their cultural and religious identity, and what their experiences tell us about contemporary Canadian citizenship.

Dr. Baljit Nagra is currently an Assistant Professor in the Criminology Department at the University of Ottawa. She has previously held postdoctoral research fellowships at the University of Ottawa and at York University after receiving her doctoral degree from the University of Toronto. Her research aims to understand how racial discourses are rearticulated in the ‘War on Terror’. Her intellectual interest is in learning how racial boundaries are transformed through a language of gender, religion and security, creating ‘legitimate/desirable’ and ‘illegitimate/undesirable’ members of westerns nations, and reproducing past racialized nation state projects. Her research has been published in refereed journals such as the Canadian Journal of Sociology and the Journal of Ethnic and Migration Studies. At the University of Ottawa, she is conducting a nation wide study that measures the impact of counter terrorism policies on Muslim communities in Canada. Her main areas of interest are in Race and Ethnicity, National Security and Surveillance, Gender Studies and Qualitative Research.

Monia Mazigh was born and raised in Tunisia and immigrated to Canada in 1991. She was catapulted onto the public stage in 2002 when her husband, Maher Arar, was deported to Syria where he was tortured and held without charge. She campaigned tirelessly for his release. Mazigh holds a Ph.D. in finance from McGill University. She has published a memoir, Hope and Despair, and two novels, Mirrors and Mirages, and Hope has Two Daughters.