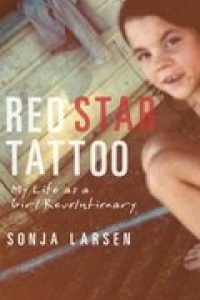 From hardscrabble Milwaukee to dreamy Hawaii, from turbulent Montreal to free-spirited California, Red Star Tattoo is Sonja Larsen's unforgettable memoir of a young life spent on the move. By the age of 16, Sonja joins a cult-like communist organization in Brooklyn--unaware of the dark nature of what awaits her.

A small, skinny 8-year-old girl holding a teddy bear stands by the side of a country road with a young man she barely knows. They're hitchhiking from a commune in Quebec to one in California. It is 1973 and somehow the girl's parents think this is a good idea.

Sonja Larsen's is a childhood in which family members come and go and where freedom is both a gift and a burden. Her mother, thrown out of home as a pregnant teenager by her evangelical preacher father, is drawn to the utopian ideals and radical politics of communism. Her aunt Suzie is gripped by schizophrenia, her behaviour so erratic she eventually loses custody of her daughter. And then there is her cousin Dana, shunted back and forth long-distance between her parents--Dana, whose own need to escape leads to tragedy.

Looking for a sense of family, searching to belong, to have your life mean something--this is what all these girls and young women share. As a teenager, Larsen moves to Brooklyn, embedding herself with an organization known publicly as the National Labor Federation and privately as the Communist Party USA Provisional Wing. Over her three years at the organization's national headquarters, Larsen works sixteen-hour day, eager to prove herself. Noticed and encouraged by the Old Man, the organization's charismatic leader, he makes her one of his "special girls," as well as the youngest member of the organization's militia and part of its inner circle. But even as she and her comrades count down the days on the calendar until the dawning of their new American revolution, Larsen's doubts about the cause and the Old Man become increasingly difficult to ignore.

Red Star Tattoo explores the seductions and dangers of extremism, and asks what it takes to survive a childhood scarred by loss, abuse and the sometimes violent struggle for belonging.

“As a child of the counterculture and a teenager who was promised revolution, the young Sonja Larsen desired to be a part of something monumental. As I turned the pages of this beautifully told story, my emotions ran between anger, sorrow and sheer admiration at Sonja’s determination to find belonging in her present with no guidance from her past. The parallels with what may be happening with our youth and extremism today make this story not only entertaining, but relevant to all.” —Cea Sunrise Person, author of North of Normal

SONJA LARSEN is a graduate of the Simon Fraser University Writer's Studio. Larsen's work has been published in The Globe and Mail, Room and Descant, and a number of other print and online literary magazines. She works with youth in Vancouver's Downtown Eastside. The author lives in Vancouver, BC. For more about Sonja: http://sonjalarsen.com/.