Reclaiming Art in the Age of Artifice, A Conversation with J.F. MARTEL 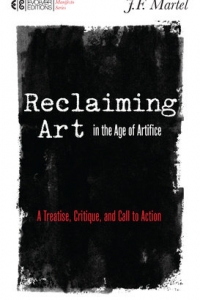 Hosted by Graham Larkin and Phil Ford, Octopus Books presents an evening of conversation with J.F. (Jean-Françsois) Martel to discuss his new book Reclaiming Art in the Age of Artifice followed by author signing.

"The book is an attempt to defend art against the onslaught of the cultural industries, which today seek to reduce art to a mindless form of entertainment or, at best, a communication tool." Martel said in an interview with Matt Cardin at the Teeming Brain.

Part treatise, part critique, part call to action, Reclaiming Art in the Age of Artifice is a journey into the uncanny realities revealed to us in the great works of art of the past and present.

Received opinion holds that art is culturally-determined and relative. We are told that whether a picture, a movement, a text, or sound qualifies as a “work of art” largely depends on social attitudes and convention. Drawing on examples ranging from Paleolithic cave paintings to modern pop music and building on the ideas of James Joyce, Oscar Wilde, Gilles Deleuze, Carl Jung, and others, J.F. Martel argues that art is an inborn human phenomenon that precedes the formation of culture and even society. Art is free of politics and ideology. Paradoxically, that is what makes it a force of liberation wherever it breaks through the trance of humdrum existence. Like the act of dreaming, artistic creation is fundamentally mysterious. It is a gift from beyond the field of the human, and it connects us with realities that, though normally unseen, are crucial components of a living world.

While holding this to be true of authentic art, the author acknowledges the presence—overwhelming in our media-saturated age—of a false art that seeks not to liberate but to manipulate and control. Against this anti-artistic aesthetic force, which finds some of its most virulent manifestations in modern advertising, propaganda, and pornography, true art represents an effective line of defense. Martel argues that preserving artistic expression in the face of our contemporary hyper-aestheticism is essential to our own survival.

Art is more than mere ornament or entertainment; it is a way, one leading to what is most profound in us. Reclaiming Art in the Age of Artifice places art alongside languages and the biosphere as a thing endangered by the onslaught of predatory capitalism, spectacle culture, and myopic technological progress. The book is essential reading for visual artists, musicians, writers, actors, dancers, filmmakers, and poets. It will also interest anyone who has ever been deeply moved by a work of art, and for all who seek a way out of the web of deception and vampiric diversion that the current world order has woven around us.

J.F. (Jean-Françsois) Martel is a writer and award-winning filmmaker working in the Canadian film and television industry. In addition to making several short films, he has written and/or directed a number of documentary programs on topics related to culture and the arts for major Francophone broadcasters, including TFO, TVA, TV5, ArTV and Radio-Canada.

He is a contributor to the web magazine Reality Sandwich. His essay on Stanley Kubrick was included in the first Reality Sandwich anthology, Toward 2012: Perspectives on the Next Age (Tarcher-Penguin), edited by Daniel Pinchbeck and Ken Jordan. His work also appears in North Atlantic Books’s recent title Pluto: New Horizons for a Lost Horizon, edited by Richard Grossinger. He occasionally blogs at reclaimingart.com, the website for his first book, Reclaiming Art in the Age of Artifice (Evolver Editions-North Atlantic Books). His Twitter handle is @jf_martel.

Graham Larkin (grahamlarkin.info) is an Ottawa-based  historian, curator, designer, teacher and sustainability advocate. He is half of smallmuseums.ca and sole proprietor of slowottawa.ca.

Phil Ford is an associate professor of musicology at the Indiana University Jacobs School of Music. Author of Dig: Sound and Music in Hip Culture (Oxford University Press, 2013). Essays have appeared in Representations, Journal of Musicology, Jazz Perspectives,Musical Quarterly, and other scholarly journals. Published work has mostly been about postwar American popular music, American cold war culture, radical and countercultural intellectual history, sound and performance. Working on a book on magic and esotericism, philosophies of presence, holism, and embodiment, etc. Deranged Wagnerian. Appreciates Marmite. Plays piano. Has dog. Founded Dial M in 2006 and is still at it.