Reading of Cosmophilia by Rahat Kurd, a finalist in the 2014 Gwendolyn MacEwen Poetry Prize 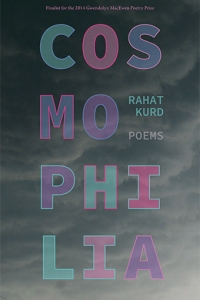 A Muslim woman engaging in religious and political imagery in lyric and narrative styles, Rahat Kurd steps out our of her cultural comfort zone to provide a unique book of poetry that combines reflections on Kashmir, Muslim culture, and religious imagery, with an often alienating yet also stimulating city life.

What earthly use is the love of ornament? Slowing down to look closely at an inherited shawl made by hand, the title poem in Rahat Kurd’s Cosmophilia traces an object of luxury to the traditionally male art of Kashmiri shawl embroidery. The poet works with images from Kashmir, her maternal family’s place of origin, where the ability to make and appreciate beautiful things is both absolutely essential and taken for granted; where increasingly rare levels of artistic mastery are simultaneously prized and trivialized; where the struggle to
carry on traditional art forms is strained by awareness of increasing obsolescence, severe political repression, and environmental degradation; a place both celebrated and dismissed as spectacle, as “paradise on earth.”

This emotionally powerful collection follows the elaborate, unexpected turns of the poet’s imagination, enlisting intricate details of memory and language and the occasional plain truth – “the hard solitude of the maker.” They intertwine political conflict and family history; they imagine Hamlet reluctantly confronting the partition of India and Pakistan. Cosmophilia translates multiple glittering facets of Muslim culture into, and reflects back from, the immediacy of embodied, urban Canadian experience.

“This very rich world of images & sounds offers something of a gift to English-speaking Canadian readers … it is [a] sense of brokenness, in language, in inheritances, in personal & public politics that haunts the various stories inherent in the longer poems … Some poems develop an imaginative connection with older languages … These poems cover a lot of ground …Cosmophilia is full of moments [that] strike to the heart. It’s a rich & rewarding first collection by a writer I’m sure we’ll be hearing more from.” – Eclectic Ruckus

“Universal experiences of loss, betrayal, rootlessness, loneliness and return are captured in many poems. The importance of art, of “making”, permeates the collection. Rarely have I seen the purpose and importance of art better or more beautifully portrayed than in the [title] “Cosmophilia” sequence.”– Rita Donovan, Ottawa-Carleton Book Award winner, Dark Jewels and Daisy Circus

“What a joy! Cosmophilia is everything at once: international, urban, historical, current, traditional, innovative... These are poems of beauty and challenge, dissonance and harmony, charged with Kurd’s sense of her very own everywhere.” – Wayde Compton, City of Vancouver Book Award Winner, The Outer Harbour

Rahat Kurd is the author of Cosmophilia, a collection of poems published by Talonbooks in 2015. A prose writer whose essays have appeared in The Walrus and Maisonneuve magazines, she is at work on a memoir about the making of Muslim culture in North America. The poetry sequence “Seven Stones for Jamarat”, published in Exile Literary Quarterly, is currently nominated for a Pushcart Prize, and was a finalist in the 2014 Gwendolyn MacEwen Poetry Prize. Rahat was selected as Emerging Artist in the Literary Arts category of the 2013 Vancouver Mayor’s Arts Awards.