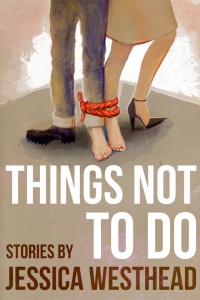 Jessica Westhead, Wendy MacIntyre & Joanne Proulx, 3 women writers, will be visiting our store on November 13 to read their new books!

Jessica Westhead, called by CBC one of the "10 Canadian women writers you need to read now" will be visiting us from Toronto. Her latest book Things not to do is a collection of stories that seeks to examine—through humour, wit, empathy, and honesty—the dark side of ordinary people. We know them; sometimes we are them. A man attends a gathering on the coattails of his new, zealously empowering friend. A woman helps her husband build an escape room to free him from working for a hated boss. A veteran wedding DJ imparts wisdom, and more besides, to a new recruit. The father of a teen pop sensation gathers with his fans in the wake of a controversy. The actions of these characters, for good or ill—and there is light in their lives, as often as there is dark—stem from the same place, and Westhead cuts right to the heart of that place. They aren't scheming supervillains; they're folks trying to make the most of what they think they have—even if that sometimes means stepping on someone who doesn't deserve it.

Wendy MacIntyre, who lives in Carleton Place, will be reading her new novel Hunting Piero. Hunting Piero interweaves Renaissance artist Piero di Cosimo’s fifteenth-century viewpoint with the twenty-first-century reality of two young Canadian students: Agnes Vane, an art history major fascinated by di Cosimo’s multi-layered imagery, and Peter (Pinto) Dervaig, a student of philosophy passionate about preventing cruelty to animals. Both Agnes and Pinto were marginalized in their adolescence because of their unusual appearance. Agnes has slightly simian features. Pinto is a huge man with a multihued skin pigmentation. Hunting Piero tells the tale of a passionate moral quest and equally, a story of redemption and of love tested by tragic missteps and their deadly consequences.

Joanne Proulx’s first novel Anthem of a Reluctant Prophet won Canada’s Sunburst Award for Fantastic Fiction and was named a best debut by The Globe and Mail and Kirkus Reviews. A feature film adaptation of the novel will be released in 2018. A graduate of the Bennington Writing Seminars, Joanne lives, writes and teaches in Ottawa. Joanne will be reading her new novel We All Love the Beautiful Girls.