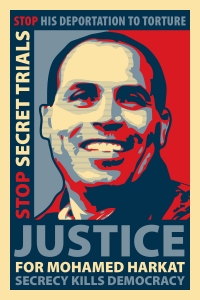 December 10 is International Human Rights Day. Ironically it is also the day Mohamed (Moe) Harkat was arrested under a security certificate 15 years ago. He has never been charged with a crime but he has spend years in jail and he faces deportation to Algeria where he risks detention, disappearance and torture.

COME SHOW YOUR SUPPORT for Moe Harkat on December 8 at 9:30am on the steps of Parliament Hill, while inside, his wife, Sophie Harkat, will be holding a press conference.

Sophie Harkat will be calling on the Trudeau government to respect its legal obligations and to stop the deportation proceedings to torture. The recent settlements awarded to Canadians who were tortured because of Canada's actions show the importance of clear and unwavering commitment against torture and actions that could lead to torture.

See you on December 8. Thank you!