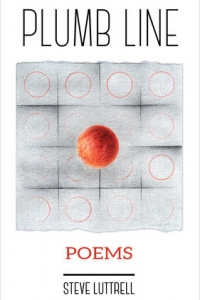 Steve Luttrell is the founder and publishing editor of the acclaimed Café Review, which has published for a remarkable 25 years and printed the work of twelve Pulitzer Prize winners. He hosts his own TV Show (Poet's Café), and has run the historical Portland Club, giving him a strong presence in the region and a large following among New England poets and writers. Steve's intimate, unassuming voice is driven by a musician's sense of rhythm and a deceptive simplicity: "and the ships/at anchor/an emblem of/waiting/but March/is a time/of endurance/and the channel/waters deep/so waiting is/what we will do/knowing/there can be no/other way." Steve Luttrell has published five chapbooks and six major editions of poetry, including Home Movies, Conditions, The Vagaries: A Winter's Sequence, and Pemaquid and Other Poems. Plumb Line secures Luttell's place as an important voice in contemporary poetry.

More than ten years in the making, Plumb Line by Steve Luttrell, former poet laureate of Portland, Maine, conjures the beauty of the New England Coast and the enduring power of nature. In sparse, accessible verse, the poet evokes the wild Maine landscape--the rocks and wildlife, the shifting planets, and the surging waters--at the same time that he casts an observant eye on his fellow creatures. He deftly melds the eternal and the transitory, the extraordinary and the routine in lines such as, "the light of long/dead stars/and the dogs/sleeping/under the bed." He imbues the small routines of daily life with quiet significance and casts the enormity of the cosmos to human scale.

Cameron Anstee is a local poet. He runs Apt. 9 Press and holds a Ph.D. in Canadian Literature from the University of Ottawa. He is the editor of The Collected Poems of William Hawkins and author of Book of Annotations. Book of Annotations deploys a number of strategies—including erasure, found, haiku, one line, one word, concrete, and lists—to question how small a poem can be, and how a small poem can be expansive. Engaging with contemporary and historical minimalists, Book of Annotations is a dialogue in shorthand with H.D., Nelson Ball, Lorine Niedecker, Aram Saroyan, Phyllis Webb, Robert Lax, and others.

natalie hanna is a queer, feminist, ottawa lawyer, of middle-eastern descent working with low income populations. her writing focuses on feminist, political, and personal themes. She runs battleaxe press (small poetry press) / is the Administrative Director of the Sawdust Reading Series / serves as newsletter editor and board member at Arc Poetry Magazine.  Her work, interviews, have appeared online and in print in various publications, including with Literary Landscape, In/Words Magazine, phafours press, Hussy Press, Bywords, the Dusie Blog, the Chaudiere Books Blog, Canthius, shreeking violet press, and Peter F. Yacht Club,  among others. Find her at: https://nhannawriting.wordpress.com to learn more.

Steve Luttrel, Cameron Anstee and Natalie Hanna will be reading from their new collections of poems, Plumb Line, Book of Annotations., and CONCEALED WEAPONS/ANIMAL SURVIVORS.