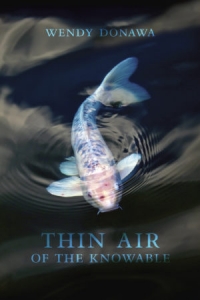 Please join us for a reading by three women poets featuring Wendy Donawa, Deanna Young and Rhonda Douglas on October 26!

Wendy Donawa, formerly a museum curator and academic in Barbados, now lives on the West Coast and participates in Victoria’s vibrant poetry scene. Her poems have appeared in anthologies, magazines, and online publications across Canada. She was a finalist in The Malahat Review’s 2013 Open Season Competition, and in 2015 she was runner-up in the inaugural Cedric Literary Awards. She has published three chapbooks, Sliding Towards Equinox (Rubicon Press, 2009), Those Astonishments of Sorrow, of Joy (Leaf Press, 2012) and The Gorge: A Cartography of Sorrows (JackPine Press, 2016). Wendy Donawa will read from her first collection Thin Air of the Knowable. More about Wendy:  http://www.wendydonawa.com/.

Deanna Young‘s most recent book of poetry, House Dreams, was published in 2014 and nominated for the Trillium Book Award for Poetry, the Ottawa Book Award, the Archibald Lampman Award and the ReLit Award. Her previous books are Drunkard’s Path and The Still Before a Storm. A new book, Reunion, will be published by Brick Books in 2018. Originally from southwestern Ontario, she lives in Ottawa, Canada. More about Deanna: https://deannayoung.ca/.

Rhonda Douglas is the author of Some Days I Think I Know Things: The Cassandra Poems (Signature Editions, 2008) and the short fiction collection Welcome to the Circus (Freehand Books, 2015). A selection of poems from her current poetry project were featured in The New Quarterly’s Spring 2013 issue. You can find her online at www.shallicompare.com and on Twitter: @shallicompare. She splits her time between Ottawa and the Maple Leaf Lounge.