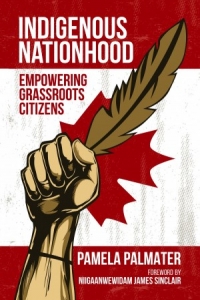 Well-known Indigenous author, lawyer, activist and academic, Pamela Palmater, will be in Ottawa on Monday June 20 for a launch of her new book: Indigenous Nationhood: Empowering Grassroots Citizens.

Fiercely anti-racist and anti-colonial, this book is intended to help rebuild the connections between Indigenous citizens and their home communities, local governments and Indigenous Nations for the benefit of future generations.

“Like the tools that our ancestors used for survival, Palmater’s words are sharp like a knife.” — Chief Lynn Acoose, Sakimay First Nation

“Through Palmater’s relentless pursuit for justice and improved quality of life, she will undoubtedly set a new era for positive change for this country.” — Chief Deborah Robinson, Acadia First Nation

“Palmater’s blogs provide a glimpse of the deep complexities we face as indigenous peoples living in a colonial Canada. Her words are the articulation of this generation’s frustration with Canadian colonial policy.” — Derek Nepinak, Grand Chief, Assembly of Manitoba Chiefs

“Pamela Palmater is one of the strong voices of a new generation of Native activists and intellectuals. Her essays on Indigenous Nationhood are intelligent, thoughtful, and well informed. And they take no prisoners.” — Thomas King, author of An Inconvenient Indian

Pamela Palmater is Mi’kmaq from the Eel River Bar First Nation in northern New Brunswick. She has been a practising lawyer for sixteen years, working on treaties, land claims, self-government, economic development, policy development and intergovernmental relations, including at the Nova Scotia Human Rights Commission as an investigator of human rights complaints. She is an associate professor and chair in Indigenous governance at Ryerson University.