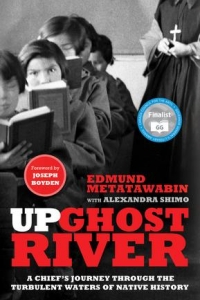 In conjunction with the final national event of the Truth and Reconciliation Commission of Canada and Time for Reconciliation KAIROS Gathering, Octopus Books, KAIROS Canada and Mennonite Central Committee proudly present an evening of conversation based on two books—Up Ghost River, A chief's Journey Through the Turbulent Waters of Native History and Norval Morrisseau, Man Changing Into Thunderbird—that portray life journeys impacted by Canada's Indian Residential School System.

Hosted by Shelagh Rogers, host of CBC's The Next Chapter and an honorary witness for the Truth and Reconciliation Commission of Canada

Up Ghost River, A chief's Journey Through the Turbulent Waters of Native History by Edmund Metatawabin and Alexandra Shimo is a powerful, raw and eloquent memoir about the abuse former First Nations chief Edmund Metatawabin endured in a residential school—one of the worst in Canada: St. Anne's in Northern Ontario—in the 1960s, the resulting trauma, and the spirit he rediscovered within himself and his community through traditional spirituality and knowledge. Edmund's story gives a personal face to the problems that beset Native communities and fresh solutions, and untangles the complex dynamics that sparked the Idle No More movement. Haunting and brave, Up Ghost River is a necessary step toward our collective healing. Foreword by Joseph Boyden. Norval Morrisseau, Man Changing Into Thunderbird by Armand Garnet Ruffo is an innovative and rich biography of Ojibway shaman-artist Norval Morrsseau considered by critics, art historians and curators alike one of the most innovative artists of the twentieth century and arguably Canada’s greatest painter. Drawing upon years of extensive research, including interviews with Morrisseau himself, and his own Ojibway heritage, Ruffo evokes the artist’s life from childhood to death, in all its vivid triumphs and tragedies. Captivating and readable, this is a brilliantly creative evocation of the art and life of Norval Morrisseau, a life indelibly tied to art.

Edmund Metatawabin, former Chief of Fort Albany First Nation, is a Cree writer, educator and activist. A residential school survivor, he has devoted himself to righting the wrongs of the past, and educating Native youth in traditional knowledge. Metatawabin now lives in his self-made log house in Fort Albany, Ontario, off the reserve boundary, on land he refers to as my “Grandfathers’ Land.” He owns a local sawmill and also works as a consultant, speaker and researcher.

Armand Garnet Ruffo is an Ojibway, the author of four books of poetry, Opening In the Sky (Theytus Books, 1994),Grey Owl: The Mystery of Archie Belaney (Coteau Books, 1997), At Geronimo’s Grave (Coteau Books, 2001) and the Thunderbird Poems (Harbour Publishing, 2015). He has also edited and co-edited(Ad)Dressing Our Words: Aboriginal Perspectives on Aboriginal Literatures (Theytus Books, 2001) and An Anthology of Canadian Native Literature in English(Oxford University Press, 2013). His screenplay, A Windigo’s Tale, has been shown across Canada and at film festivals internationally. He is an Associate Professor in the Department of English Language and Literature at Queen’s University, and lives in Kingston, ON.