Ottawa Premiere of Resistencia: The Fight for the Aguan Valley 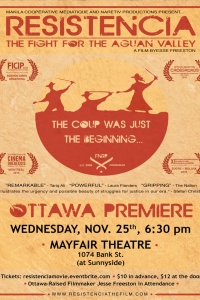 After being shown at festivals worldwide, broadcast on the world's largest Spanish-language television network, and taken on a 54-city tour of North America, Ottawa's own Jesse Freeston is bringing his most-acclaimed film to date back to the city that made him.

TICKETS: $10 in advance, $12 at the door: https://resistenciamovie.eventbrite.com/

“Freeston’s extensive footage from post-coup Aguán transmits the collective excitement that comes with reclaiming the right to a dignified existence.” - Belén Fernández, Warscapes

"A film illustrating both the urgency and possible beauty of struggles for justice taking place in our era." - Stefan Christoff, Free City Radio

June 28th, 2009. The first coup d'état in a generation in Central America overthrows the elected president of Honduras. A nationwide resistance movement is born, taking inspiration from the daring act of the farmers of the Aguan Valley to take control of 10,000 acres of plantations claimed by Miguel Facussé, the country's largest landowner and a key player in the coup. Filmed over four years, beginning with the coup itself, 'Resistencia: The Fight for the Aguan Valley' follows one clever journalist and three audacious members of the farmers' movement as they build-up their new communities and agitate for a return to democracy. All the while trying to survive the violent reaction of the landlord and the coup regime he helped install.