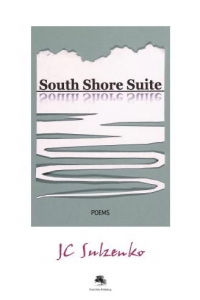 Prince Edward County publisher Brian Flack gives his reasons for electing to publish JC’s lyric and narrative poetry in PPP’s inaugural publishing program. “In our current political climate, the need for ‘something’ that speaks to the unspoiled uniqueness of the southernmost reaches of our County was not just needed, it was demanded!

“Rendered in language that is evocative of place, time, and sensation–yet straightforwardly affecting, many of the poems will transport you body and soul to the South Shore of the County, addressing head-on, as they do, issues both natural and ‘man-made’. These poems will inspire in any reader a wondrous appreciation for the area’s land, its birds, the water …”

JC responds. “I am honoured PPP chose South Shore Suite for this publishing season and gratified that poems in this collection turn the spotlight on Prince Edward County’s fragile South Shore. My work also speaks to the power of life-cycle events, whether mundane or momentous.”

The 100-page book takes its title from the first of its four sections, which contains poems rooted in the landscape of Prince Edward County and posted a line-a-day over the course of more than a year. Its second section brings a wider lens to the natural world. Poetry that reflects on life choices made by people in diverse professions comprises the third part of the book. The collection concludes with poems closest to JC’s personal experience on subjects ‘from cradle to grave.’ County artist Susan Straiton created the arresting cover art.

"This is a collection that rewards the reader with its careful, precise and often-beautiful rendition of those elements in life that enclose us: nature, other people and the progress of time." - The Glebe Report

JC Sulzenko’s work has been featured in local and national media, on Arc’s Poem of the Year shortlist, and in Vallum, Oratorealis, and Maple Tree Literary Supplement, and by The Light Ekphrastic. In November 2017, Point Petre Publishing released her first full collection, South Shore Suite…POEMS. (www.pointpetrepublishing.ca)

JC uses the pseudonym A. Garnett Weiss for her found poetry and centos, which took top honours in The Bannister anthologies in 2016 and 2013. She is the only Canadian in Silver Birch Press’s 2015 chapbook anthology, Ides. In 2016, JC curated the poetry selections for Ekphrasis at Blizzmax Gallery in Prince Edward County.

In 2018, her work will appear in the next Poet’s Pathway project, and in the 25th Prince Edward County Studio Tour Anniversary exhibition and chapbook. The titles of the 2017 and 2018 broadsheets from KaDo Ottawa were drawn from her haiku.

JC serves on the selection board of Bywords.ca and as curator for The Glebe Report’s “Poetry Quarter.” JC co-authored two poetry chapbooks with Carol A. Stephen, Breathing Mutable Air and Slant of Light. She has published six books for children and families, including What My Grandma Means to Say, Fat poems Tall poems Long poems Small, and Boot Crazy.

For over a decade, JC judged English poetry entries in the Ottawa Public Library’s “Awesome Authors Contest” for emerging writers ages 9-17. On behalf of the Ottawa International Writers Festival, The Griffin Trio, MASC, and the City of Ottawa, she has led poetry-writing workshops in the community and at local schools.

JC also served as poet-in-residence in school settings, including at Ottawa’s The School of Dance.

In 2017, she launched BESPOKE POETRY, a service which creates poetry on commission to honour special occasions or people, or in memoriam. www.jcsulzenko.com