Ottawa launch of — Gender: Your Guide with Lee Airton 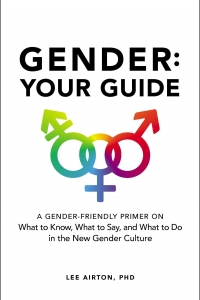 Founder of ‘They is my pronoun’, the NBD Campaign, and Queen’s University Professor–Dr Lee Airton is out with a new book to help folks understand what to know, what to say, and what to do in the new gender culture. Learn more about Dr Lee Airton here.

The event is presented by: Dr Lee Airton, Octopus Books, and the CCGSD.

The days of two genders—male, female; boy, girl; blue, pink—are over, if they ever existed at all. Gender is now a global conversation, and one that is constantly evolving. More people than ever before are openly living their lives as transgender men or women, and many transgender people are coming out as neither men or women, instead living outside of the binary. Gender is changing, and this change is gaining momentum.

We all want to do and say the right things in relation to gender diversity—whether at a job interview, at parent/teacher night, and around the table at family dinners. But where do we begin?

From the differences among gender identity, gender expression, and sex, to the use of gender-neutral pronouns like singular they/them, to thinking about your own participation in gender, Gender: Your Guide serves as a complete primer to all things gender. Guided by professor and gender diversity advocate Lee Airton, PhD, you will learn how gender works in everyday life, how to use accurate terminology to refer to transgender, non-binary, and/or gender non-conforming individuals, and how to ask when you aren’t sure what to do or say. It provides you with the information you need to talk confidently and compassionately about gender diversity, whether simply having a conversation or going to bat as an advocate.

Just like gender itself, being gender-friendly is a process for all of us. As revolutionary a resource as Our Bodies, Ourselves, Gender: Your Guide invites everyone on board to make gender more flexible and less constricting: a source of more joy, and less harm, for everyone. Let’s get started.