Ottawa and Empire: Canada and the Military Coup in Honduras with Author Tyler Shipley 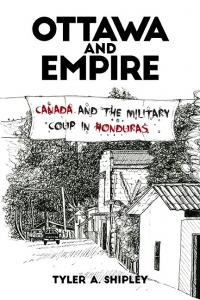 In June 2009, the democratically elected president of Honduras was kidnapped and whisked out of the country while the military and business elite consolidated a coup d’etat. To the surprise of many, Canada implicitly supported the coup and assisted the coup leaders in consolidating their control over the country.

Since the coup, Canada has increased its presence in Honduras, even while the country has been plunged into a human rights catastrophe, highlighted by the assassination of prominent Indigenous activist Berta Cáceres in 2016. Drawing from the Honduran experience, Ottawa and Empire makes it clear that Canada has emerged as an imperial power in the 21st century.

"Based upon meticulous fieldwork, including dozens of interviews with activists in resistance communities, this book is a compelling account of the nefarious effects of Canada’s foreign policy in Central America and elsewhere. Shipley shatters the illusion that the Canadian government is dedicated to keeping ‘peace.’ This book is a must-read for activists and academics interested in international relations, international development, and social movements, which provides an alternative account of the official story of intervention in Honduras." – Susan Spronk, associate professor of international development and global studies, University of Ottawa

"In this readable and eye-popping book, Shipley gives us not only a crisp analysis of the 2009 Honduran coup and its aftermath, but a damning exposition of Canadian imperialism at its most raw and destructive—rooted in big economic interests and broad geopolitical aspirations." – Dana Frank, professor of history, University of California, Santa Cruz

"The 2009 coup in Honduras in which the military overturned the elected government of President Manuel Zelaya has been followed by years of popular unrest and widespread human rights violations. Based on extensive interviews with a wide range of Hondurans, Shipley recounts the events leading up to and following the coup and the surprising support for the post-coup regime by the Canadian government. Shipley’s analysis presents an important critique of Canadian economic interests in Honduras and the implications for understanding Canada’s role in the hemisphere." – Laura Macdonald, professor of political science and political economy, Carleton University

Tyler Shipley is professor of Culture, Society, and Commerce at the Humber Institute of Technology and Advanced Learning. He is an Associate Fellow with the Centre for Research on Latin America and the Caribbean (CERLAC). He has written for academic journals and local and mainstream media across North America and Europe.