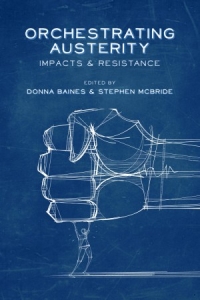 The economic stimulus which followed the 2007-08 global financial crisis have been succeeded by what we now call “austerity” measures –characterized by a renewed assault on public spending and further restructuring of social and labour market policies.

Claiming no viable alternatives exist, neoliberal politicians are selling austerity to the public as a virtuous necessity in the face of government deficits. With insights and inspirational stories of resistance from a range of scholars, as well as labour organizers and activists, Orchestrating Austerity tries to determine if there is something new in this era of austerity or if it is a continuation and intensification of earlier forms of neoliberalism.

The editors and various authors will speak briefly, followed by discussion and refreshments.

Donna Baines is Associate Professor of Social Work and Labour Studies at McMaster University. In 2006-07, she was Visiting Scholar, RMIT University, Melbourne, Australia.

Donna has published extensively, in a wide variety of areas, including restructuring, health and safety, bullying, the organization of work for social workers, and social service public policy. Her articles have appeared in Social Work, Journal of Health and Safety, Women and Work, Australian Social Work, Social Justice and Studies in Political Economy, among several other journals. Donna is also editor of Doing Anti-Oppressive Practice. Building Transformative, Politicized Social Work.

Donna is also a board member of Ferncliff Daycare and After School Programme, as well as a member in Canadian Association of Schools of Social Work, Progressive Economics Forum, Society for Socialist Studies, National Activist School Planning Project and Flying Flamingo Sisters.

Stephen McBride, Professor and Director of the Centre for Global Political Economy, specializes in political economy, and comparative public policy, and Canadian politics. He is the author of Not Working: State, Unemployment and Neo-conservatism in Canada (1992) which won the 1994 Smiley prize, and Paradigm Shift: Globalization and the Canadian State (2001; 2nd edition 2005). He is the co-author of Dismantling a Nation: Canada and the New World Order (1993; 2nd edition 1997) and several co-edited volumes: Global Turbulence: Social Activists’ and State Responses to Globalization (2003), Global Instability: Uncertainty and New Visions in Political Economy (2002), Globalization and its Discontents (2000), and Power in a Global Era (2000).

Stephen McBride is a professor in the Department of Political Science and Canada Research Chair in public policy and globalization at McMaster University.