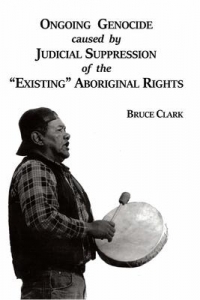 Bruce Clark spent forty-six years defending the rights of Natives across North America. A scholar specializing in the legal history of the evolving relationship between Natives and Newcomers, he holds an MA in constitutional history and a PhD in comparative jurisprudence and is the author of Native Liberty, Crown Sovereignty and Justice in Paradise (McGill-Queen’s University Press). Much of Clark's awareness of the "serious bodily or mental harm" meted out by the court system's injustices comes from the fact he lived for twelve years on Indian reservations in northern Canada. He and his wife Margaret raised their three children there and were witnesses to the loss of lives attributable to the stress to which the young people in particular were vulnerable.

The ten essays in Ongoing Genocide caused by Judicial Suppression of the “Existing” Aboriginal Rights deal with aspects of the “genocide”—within the meaning of section 2(b) of the United Nations’ genocide convention—of Indigenous peoples in Canada. That section indicts the imposition of “serious bodily or mental harm” against groups, such as that evidenced by the high rates of suicides of Indians in reaction to the courts’ injustices committed for political reasons contrary to the rule of law.