On Building a Social Movement, with John Saul, Blair Rutherford and Manfred Bienefeld 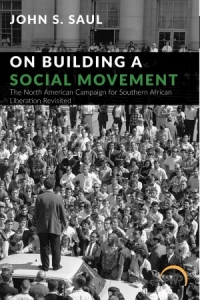 On Building a Social Movement focuses on the North American campaign for southern African liberation. It does so by first evoking both the region-wide battle for liberation from racial oppression that emerged in southern Africa between 1960 and 1994 and the world-wide mobilization of support for that regional struggle which emerged alongside it. It then examines in some detail the building of movements in both Canada and the United States designed to contribute to this notable global effort. These movements sought to publicize the positive goals and concrete undertakings of the liberation struggles on the ground in southern Africa while also focusing public attention on the policies of the governments and the corporations in North America that pulled the two countries to the wrong - the racist and exploitative - side of this African contestation.

Examining carefully both the successes and failures of this work, Saul also discusses the more general implications of such efforts to realize a broader global liberation from capital’s relentless logic; to craft current “anti-apartheid” work against comparable injustices in the relationship between Israel and Palestine; and to ground fresh efforts to renew solidarity with the peoples of southern Africa as they seek to renew the struggle against their own region’s “post-liberation” recolonization.

“John Saul offers far more than a comprehensive analysis of the historical development of Southern African solidarity movements in North America. He issues a call for an emancipatory politics and practice that locates battles for liberation in a larger context and in relationship to each other. He also challenges us to demystify the national liberation movements many of us worshiped in order to see not only their strengths and weaknesses, but in order to understand the forces that have ground many of them to a halt. What an outstanding piece of writing!” — Bill Fletcher, Jr., former President of TransAfrica Forum; host of The Global African on Telesur-English.

About the Author & Special Guests

JOHN S. SAUL, a liberation support/anti-apartheid/anti-imperialist activist both in Canada and in southern Africa since the 1960s, has taught at York University in Canada and at the Universities of Dar es Salaam in Tanzania, of Eduardo Mondlane in Mozambique and of the Witwatersrand in South Africa. Saul is the author and editor of over 20 books and dozens of articles, reports and papers on Africa over the years. He continues to speak and publish widely on the on-going struggle for meaningful democratic practice and genuinely transformative liberation both in southern Africa and in Canada.

BLAIR RUTHERFORD is a professor of anthropology at Carleton University. He has done research in southern Africa for 25 years and has published widely.

MANFRED BIENEFELD is Professor Emeritus at Carleton University from where he retired in 2012 after a long career in international development, ultimately focusing on the perverse relationship between neoliberal globalization and the possibility of meaningful democracy. Many years ago, he was also a colleague of John Saul's at the University of Dar es Salaam.