Official Launch of Finding the Way: A Novel of Lao Tzu with Wayne Ng 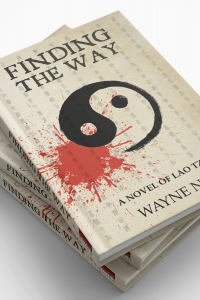 Please join Wayne Ng for the official launch of his book, Finding the Way: A Novel of Lao Tzu. Wayne will be discussing the novel and signing copies.

Rooted in history, inspired by legend.

Renowned scholars Confucius and Lao Tzu are drawn into the deadly struggle between twin princes, who vie for their ailing father’s fragmenting empire.

In the sixth century B.C., the legendary philosopher Lao Tzu seeks redemption and an opportunity to spread his beliefs in the Zhou Royal Court. He is confronted by a vainglorious King and a mad Queen. But he also discovers a protégé in Prince Meng, the thoughtful but hesitant heir to the throne. However, Lao Tzu’s ideas of peace and natural order leave him ill-prepared for the intrigue of the Palace and the toxic rivalry between Meng and his twin brother, the bold and decisive Prince Chao. Chao undermines Meng at every turn as he tries to usurp Meng’s birthright by any means. Confucius arrives and allies with Chao, thus raising the stakes for control of the dynasty, culminating in a venomous clash between Taoism and Confucianism. With the King ailing and war imminent, Lao Tzu is betrayed. The Master Philosopher must cast aside his idealism to fight for his life.

The son of Chinese immigrants, and a chronic daydreamer, Wayne was born and raised in eclectic downtown Toronto. Amidst American draft dodgers, new Canadians and a city forever insecure, looking for solid ground seemed to be the order of the day. While Toronto teemed with the richness of people from wherever, it wasn’t until he left to travel that terra firma was found. Returning to Canada fifteen months later, he soon moved to Ottawa for graduate school and never left. There he turned his dreams into writing and more travels.

Wayne is an award winning short story and travel writer who continues to push his boundaries from the Arctic to the Antarctic . His first novel, Finding the Way: A Novel of Lao Tzu ,is an imagined telling of the founder of Taoism.